A Year and a Storm

It’s now exactly one year since I began my fell walking challenge. I’ve completed 30 of the 214 Wainwrights; not bad for year 1 but I will need to step up the pace just a little if I’m to complete the challenge before my 60th birthday. I had wondered if I could sustain my interest in this project over the longer term but at the moment I’m still very keen. I’m just 5 Wainrights short of completing the Eastern Fells and I’ll be back in the Lakes for a week at the end of July to bag those and make a start on the Central Fells. With experience, my route-planning is getting better and I’ll be taking on the Central Fells in a much more ordered way.

Last Saturday I drove up to the North West because I had to be in Manchester on Monday and Tuesday. That gave me the Sunday for a quick trip to the Lake District. I had in mind a walk from Patterdale taking in Nethermost Pike and Dollywagon Pike via Eagle Crag, the east ridge of Nethermost Pike and Hard Edge. I’d seen this walk described in the April 2016 edition of Trail magazine and decided it looked like a fun day out. I varied the published walk slightly by returning via Grisedale Tarn, just in case there was time to include Seat Sandal (as it turned out, there wasn’t). The 18km walk took eight and a half hours to complete.

Naturally, I checked the weather before starting out. The forecast was for “light cloud” and no rain until later that evening. I’m now very glad that the forecast was wrong because had it been right, I may never have attempted this walk.

I arrived in Patterdale at 10am, parked up and put on my boots. The morning was cloudy but there were breaks in the cloud and plenty of warm sunshine. I set off on the footpath by the Patterdale Hotel and through Glemara Park, heading for Grisedale. The foxgloves looked fantastic in the sunshine and the vivid purple of the flowers almost glowed against the greens of grass and bracken. 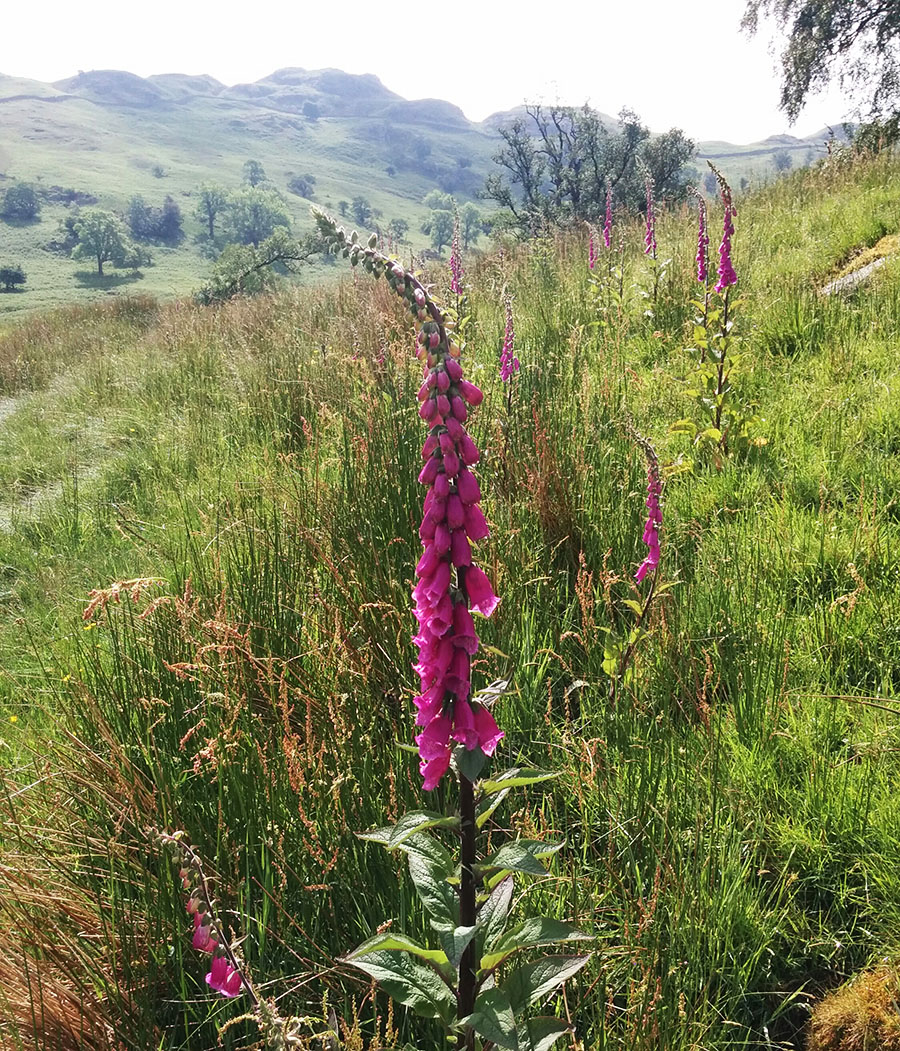 I missed my turning down onto the Grisedale track and decided to continue along the contour under Harrison and Elmhow crags. Ahead, the tops of Nethermost Pike and Dollywagon Pike were in swirling cloud. I was hoping that by the time I got there, the cloud would have lifted.

The weather was just about perfect for walking except that a light, cooling breeze would have been most welcome. I dropped down to follow the Grisedale path just after Elmhow Plantation and from that point, followed the directions in the new “walkers edition” of the Eastern Fells Wainwright guide, revised by Clive Hutchby (Nethermost Pike, page 6). I’ve started to use these guides rather than Mark Richards’ Fellranger guides simply because they are so much lighter to carry and a little more compact. 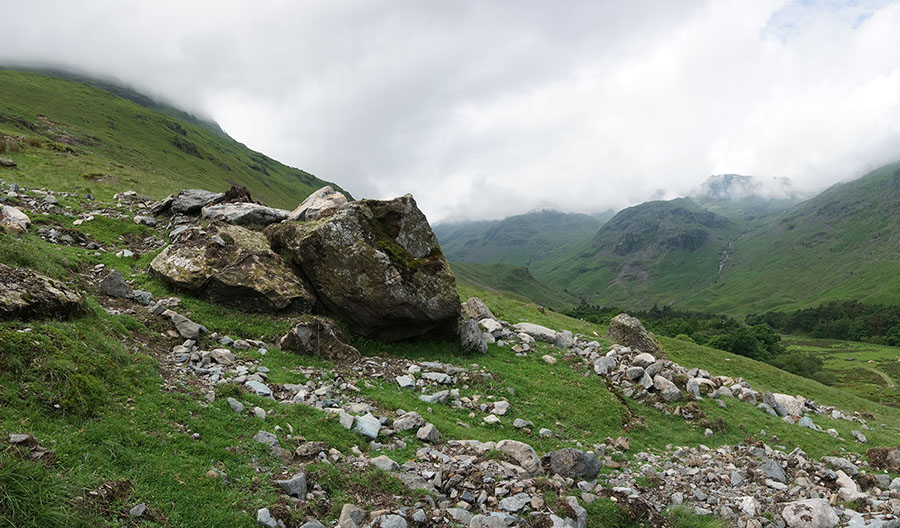 Looking across Grisedale towards Nethermost Pike (hidden by cloud)

After crossing Grisedale Beck at the footbridge, there’s a confusion of paths and another footbridge before the stone stile in the intake wall is found. The path then runs up a narrow gully with the cascades of Nethermost Beck on the left. I crossed the Beck at a lovely cascade and headed for the “rake” on the northern flank of Eagle Crag. I soon wished I’d taken the alternate route, crossing the beck further up because the route through the rake was probably the least pleasant section of the whole walk. The slope was very steep, part wet grass, part loose rock and I was very relieved to get to the top without any major slips. 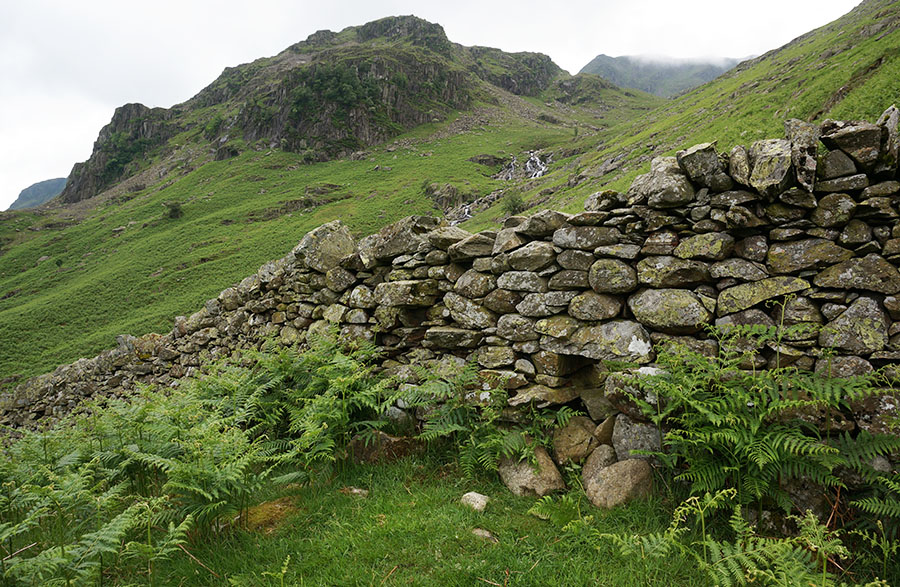 A stone stile in the intake wall with Eagle Crag beyond

From the top of the rake, it was a relatively short climb to the base of Nethermost Pike’s east ridge which, I have to say, looked frightening; very steep and rocky. Before attempting the scramble, I took some time out and sat on an enormous boulder for a while, contemplating the climb and trying to decipher a route; I couldn’t see one. I still couldn’t see one as I started the climb but a path (of sorts) did emerge as I went on.

The rocky scramble up the east ridge and across Hard Edge was the second most exhilarating part of the day. Spectacular views to the right, down into Nethermost Cove and across to Striding Edge with Catstycam beyond  and to the left, down into Ruthwaite Cove and across to Dollywagon Pike. By now, the cloud had lifted and the air was still, perfect conditions for the final haul to the summit. 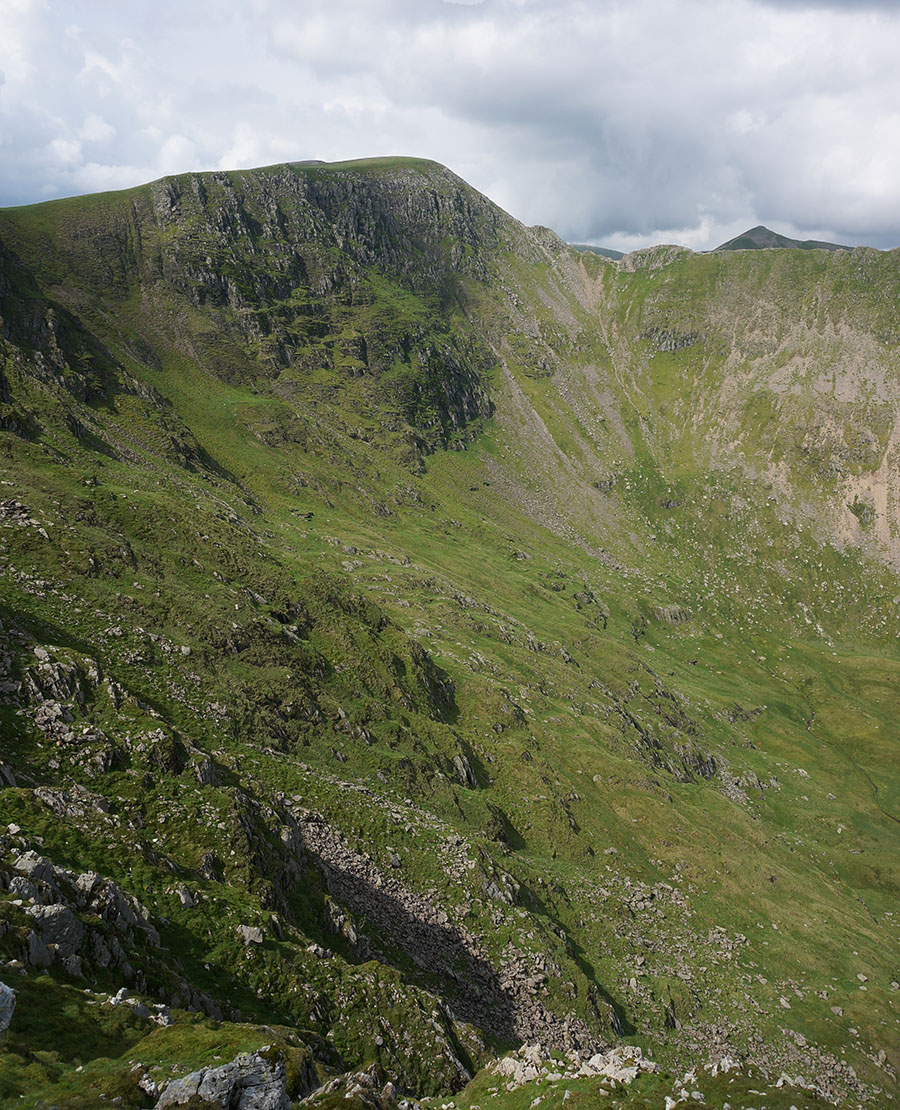 One of the best aspects of walking the less popular routes in the Lake District is the relative seclusion. Since leaving Patterdale, 4 hours earlier, I’d seen just two other people. Now, at the top, I could see the usual trail of walkers along Striding Edge and the Helvellyn ridge path but no one close enough to speak to. 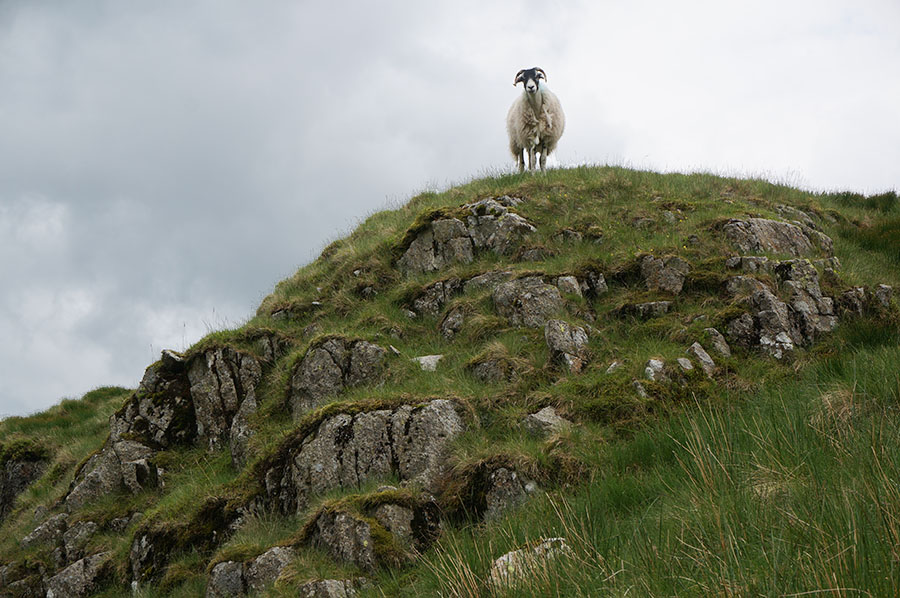 Near the start of the east ridge, a sheep looks at me as if to say “what the hell are you doing here?”

There are two cairns at the summit of Nethermost Pike, the larger and most impressive is not the highest point. The actual summit cairn is a little disappointing by comparison. From there, I headed south to High Crag, with great views down into Ruthwaite Cove and across Grisedale to St. Sunday Crag, and then to Dollywaggon Pike (the second Wainwright of the day). 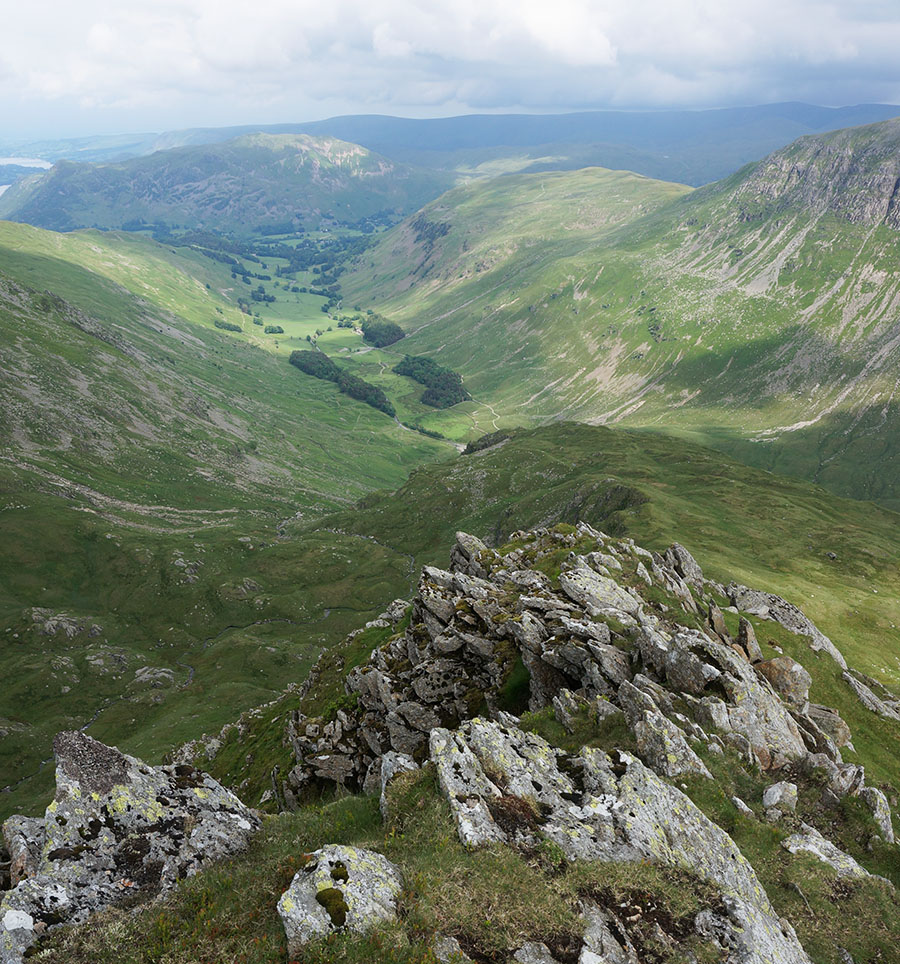 Looking back along Hard Edge and down into Grisedale with the flank of St. Sunday Crag on the right

By now I was behind schedule, so I didn’t hang around. I thought about returning via The Tongue, as described in the magazine article, but decided to stick with the original plan. I took the zigzag path down towards Grisedale Tarn, looking across the water to Seat Sandal and realising I wouldn’t have time to include that in my route. So I followed the path round to the northeast and back into Grisedale. At this point on the walk, I noticed a darkening of the sky and the odd fat drop of rain. Since I’d checked the weather before setting out, I assumed I might just be in for a light shower; wrong.

I was 6km out from Patterdale when the rain began, but frankly, the word “rain” doesn’t really do justice to the downpour of swollen drops that started falling. I only just managed to get into my wet weather gear before the torrent soaked me to the skin. Over the next few minutes, the rain grew heavier, the sky darker, the cloud thicker and thunder rolled towards me up the valley. This was a full-on rainstorm. As lightening flashed overhead, I began to fear for my safety. The only thing to do was to march on regardless; there was nowhere to shelter.

A short while later, the thunder and lightening had passed to the west but the torrential rain continued and I wondered how it was possible for so much water to fall from the sky in such a short space of time. Of course, that water has to go somewhere once it hits the ground; it sluiced and swirled all around me, over every rock surface, including the “path” I was following, which had now become a small stream.

About half an hour later, I reached Ruthwaite Lodge and by then the rain had eased a little to a steady downpour. I considered sheltering under the eaves of the lodge for a while but, looking at the sky, I realised that the rain wasn’t going to ease any time soon. A kilometre further on I came back to the footbridge over Grisedale Beck that I had crossed earlier in the day when the water was deep green and white as it tumbled over rocks. Now the water was a milky, coffee brown as it coursed and swirled down the widened channel. It was easy to imagine how such forces could easily sweep a footbridge away and I didn’t spend any time lingering on the wooden planks. 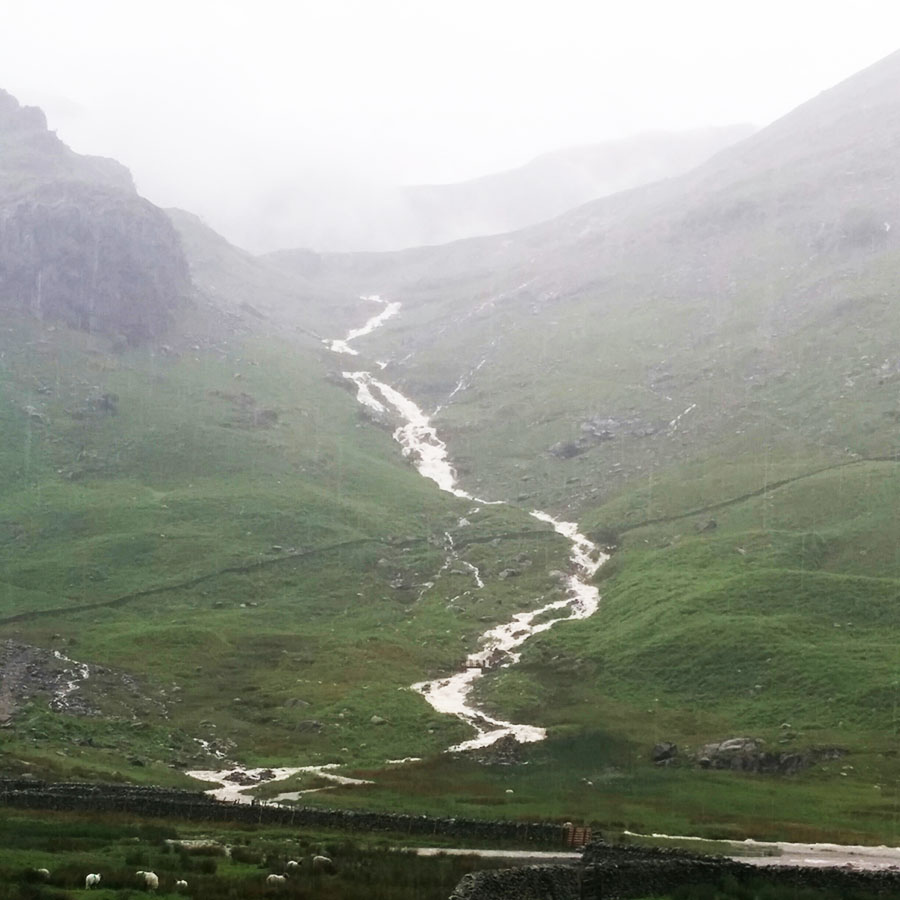 Another kilometre further and I was on the Grisedale track where the footing was surer and by now the rain had eased again to something that could reasonably be described as “rain”. I was now two and a half kilometres out from Patterdale and the closer I got to the end of my walk, the brighter the sky became and the lighter the rain. Ironically, of course, by the time I arrived back at base, the rain had all but stopped.

Naturally, I didn’t see a single human being on the return leg of my walk; no one else would have been daft enough to be there at that time and I suppose I wouldn’t have been there either, had I known what was coming over the horizon. But there is something exhilarating about being out and alone in such wild weather and on reflection, this is probably the best walk I’ve done during my first year of the challenge.∗

That completes 30 of the 35 Wainwrights in the Near Eastern Fells, leaving just 184 overall.

I had a couple of new pieces of kit with me on this walk: