Keeping my hand in

The last time I did any serious walking was back in October and the next planned visit to the Lakes is in May so I took the opportunity afforded by some good January weather to make a trip to the Brecon Beacons in order to keep myself in reasonable fell-walking condition (keeping my hand in). For whatever reason, I’d never visited the Brecon Beacons before despite them being just two and a half hours from home by car. I know some parts of Wales reasonably well; many childhood holidays were spent in North Wales and I spent 3 years at university in Mid Wales but other than a trip to the Ebbw Vale Garden Festival in 1992 and a short break on the Pembrokeshire coast, I don’t really know the South at all. So, yesterday morning, I got up in good time (not too early), set the sat-nav for Brecon and set off in search of the Brecon Beacons.

The morning was very cold (-3°) and I had to de-ice the car but the sky was a clear blue and the traffic on the M4 was free-flowing. Naturally, I’d done some homework for this walk. Back in September I’d seen a walk in the October 2016 edition of Trail magazine that I thought might make a good introduction to walking in the Brecons. At just 6½ miles, it was easily doable on a short January day but with a height gain of 839m it was testing enough to make my legs ache.

The walk is a classic horseshoe, starting at the National Trust car park at Cwm Gwdi (SO025248), following the Cefn Cwm Llwch ridge to Pen y Fan and then to Cribyn, returning along the Bryn Teg ridge and back to the start via road, track and footpath. The best thing about this route is that it’s less popular than the southern routes to Pen y Fan and there were long stretches where I had the landscape to myself. 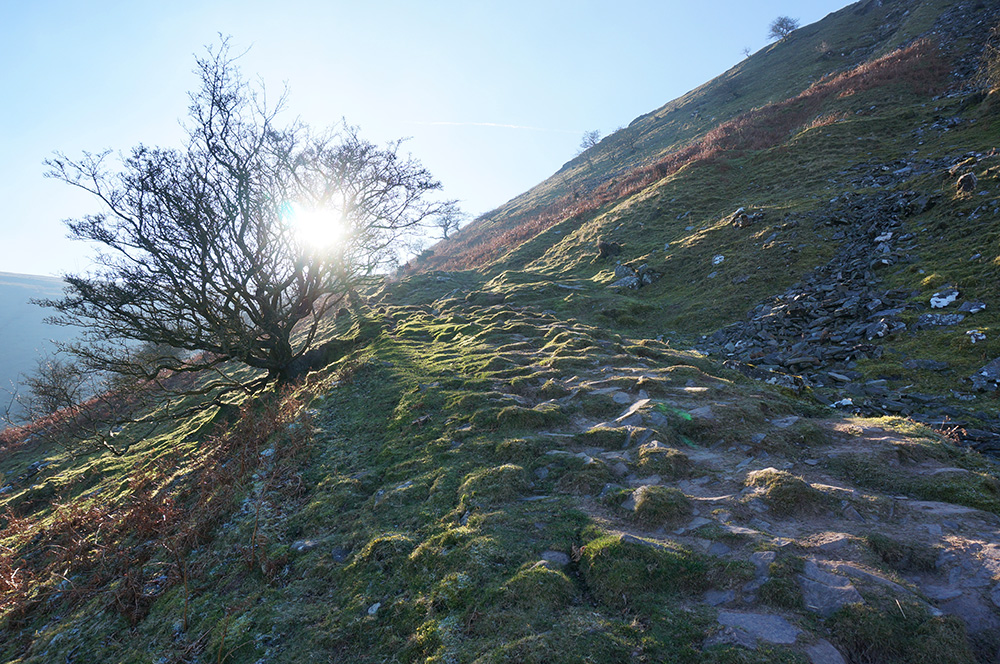 Sun directly in my eyeline along the path rising to meet the Cefn Cwm Llwch ridge.

I set off from the car park just before midday and quickly found the path up to the Cefn Cwm Llwch ridge. At this time of year, the sun is always low in the sky and during this first part of the climb, it was right in my eyeline, making it difficult to see the route ahead but the path is very well marked and there was no chance of losing the way. 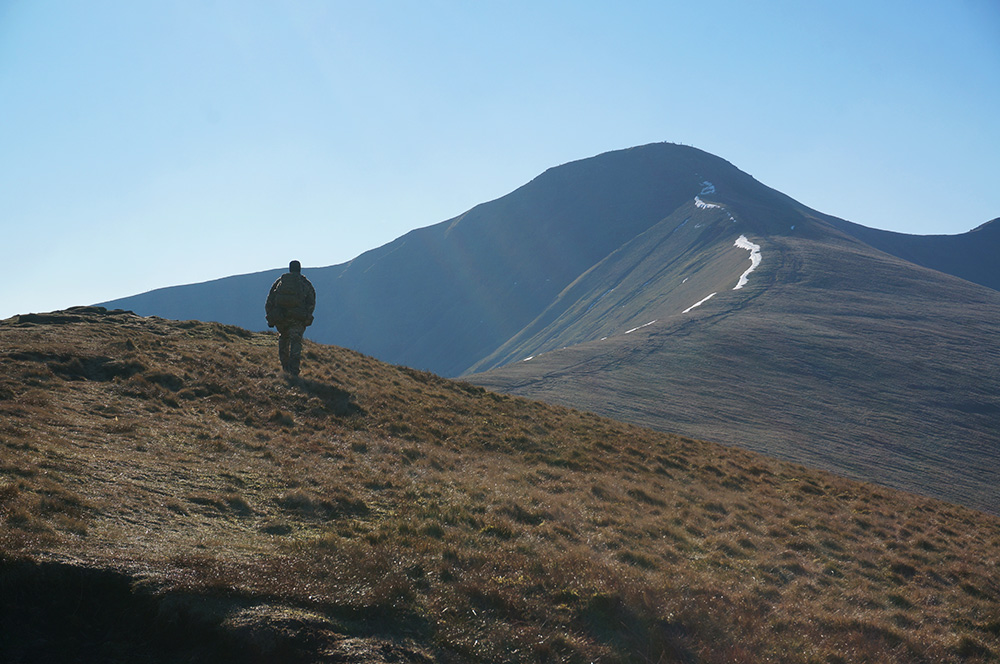 The ridge line marked with snow and Pen y Fan.

Once I’d joined the ridge path, the wind got up and the temperature dropped. The ridge line was marked with a broken snake of snow, pointing the way to the summit of Pen y Fan. The sky was that special cold blue you get on sub-zero days and the air was thinned but hazy as the low sunlight bounced and scattered. There were fantastic views to both left, across Cwm Sere to Cribyn and right, across Cwm Llwch to the mountains beyond. After a while, the wind dropped and the walk became really pleasant. 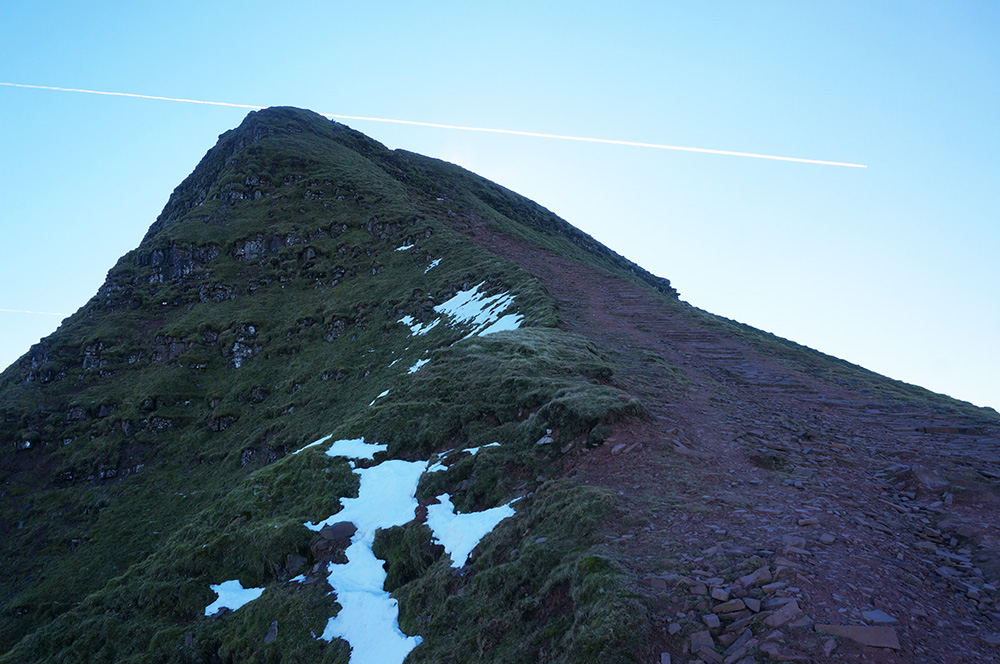 The ridge path ends with a steep climb to the summit. Although the path is generally good, there is some loose scree and hands are required in places. The National Trust have done a fantastic job of maintaining the footpaths leading up to Pen y Fan. Despite the footfall on these routes, erosion has been kept to a minimum. 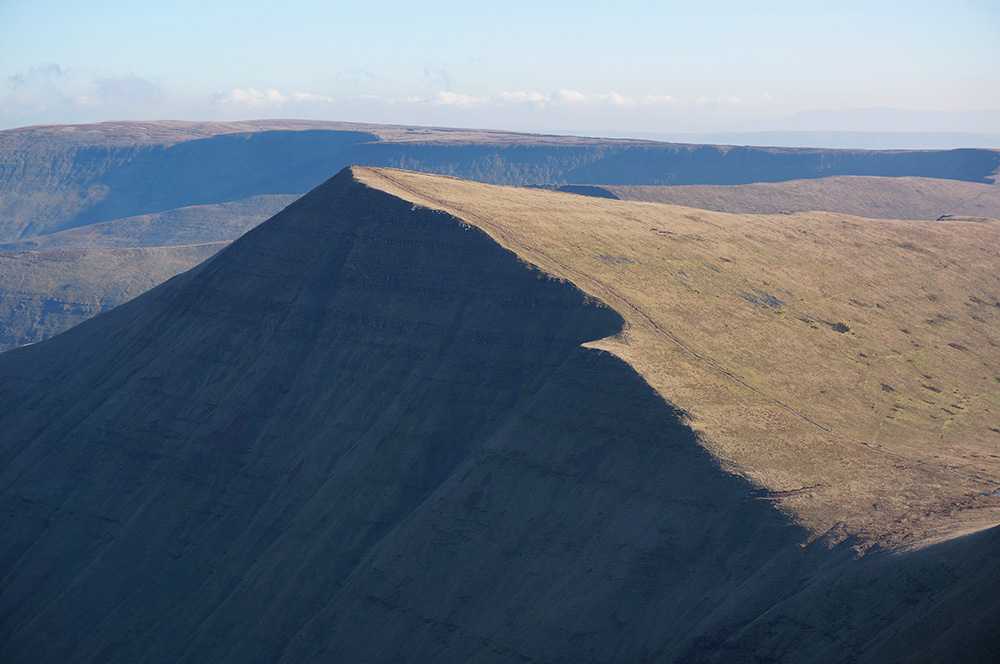 Looking across to Cribyn from the path to Pen y Fan.

Just before starting the climb to the summit, I paused to look at the view over to Cribyn, my next destination after Pen y Fan. It looked a tough slog but I’ve become familiar with this sort of optical illusion. Slopes rarely feel as steep as they look when you’re on them (fortunately!).

I reached the broad, flat summit of Pen y Fan at about twenty past one and was not surprised to see around 50 other people there. It’s a popular destination and lunchtime is always the busiest time at mountain summits, even in bad weather. I was hoping to have my lunch at the top but every available perch out of the wind was taken, so I crossed the summit plateau and continued down the steep rock steps. 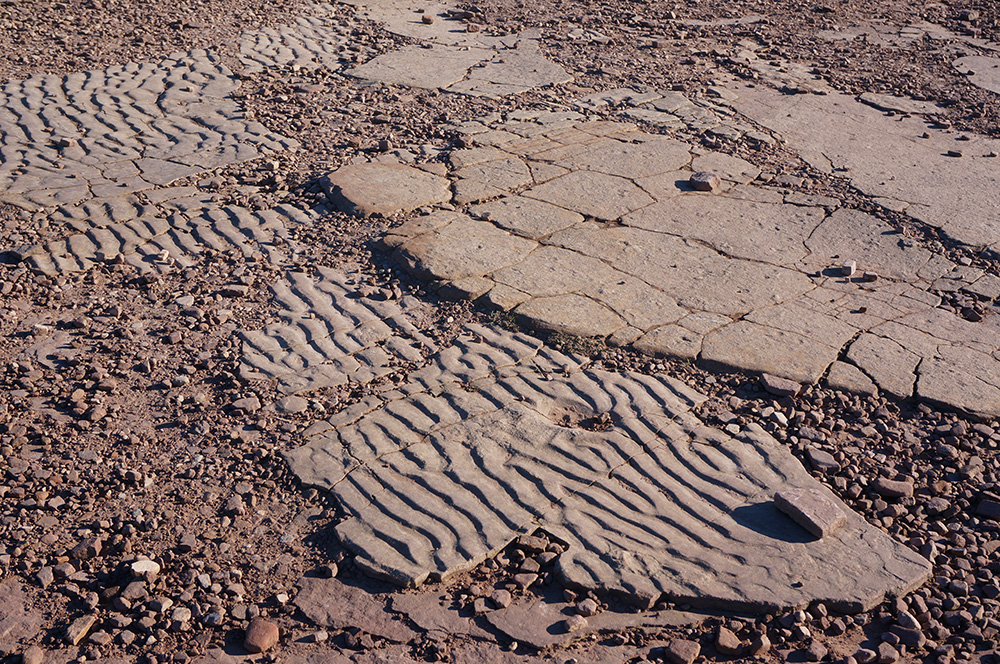 Fossil beach at the summit of Pen y Fan.

Before leaving the summit, I noticed some fossil beach formations on the surface of the Old Red Sandstone rock. The rocks that form Pen y Fan and much of the Brecon Beacons were laid down in Devonian times, about 400 million years ago. The summit itself (and that of Corn Du) are formed of a hard-wearing sandstone formation known as the Plateau Beds. These rocks were laid down in shallow waters and the ripples in the sand are now preserved as rock, 873m above sea level. 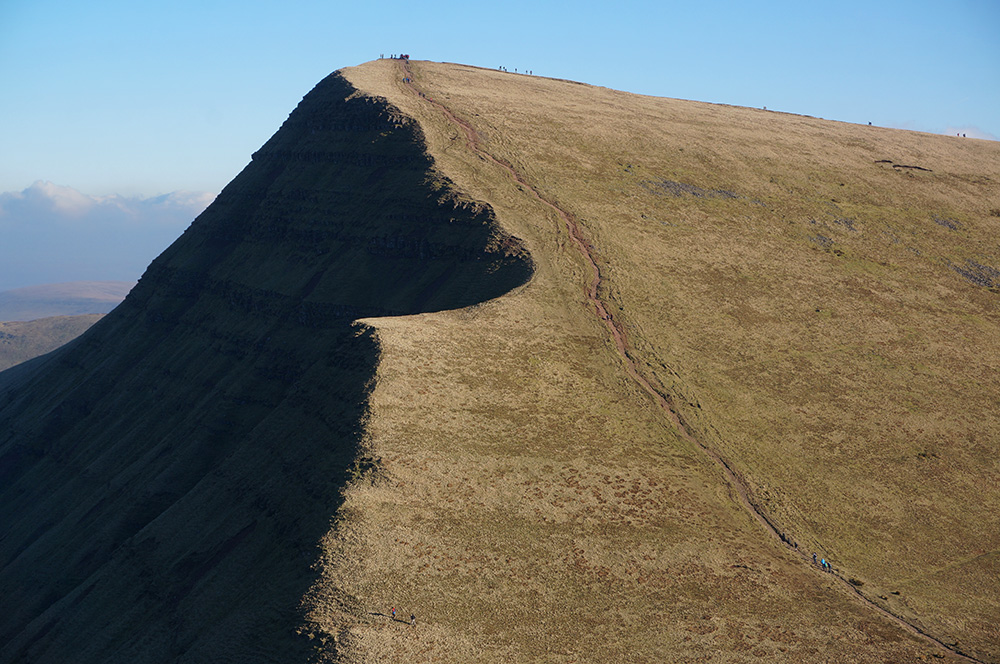 Cribyn from the steep path down from Pen y Fan. Notice the ant-like people at the summit.

During the drop from the Pen y Fan plateau, there are some great views south and ahead towards the Upper Neuadd Reservoir, right to Corn Du and, most strikingly, left to Cribyn. One of the added benefits of my route was that most people were walking (or scrambling) in the opposite direction. So, while I was stepping carefully down the rock steps, Ginsters cheese slice in hand, most everyone else was struggling and straining on the way up. 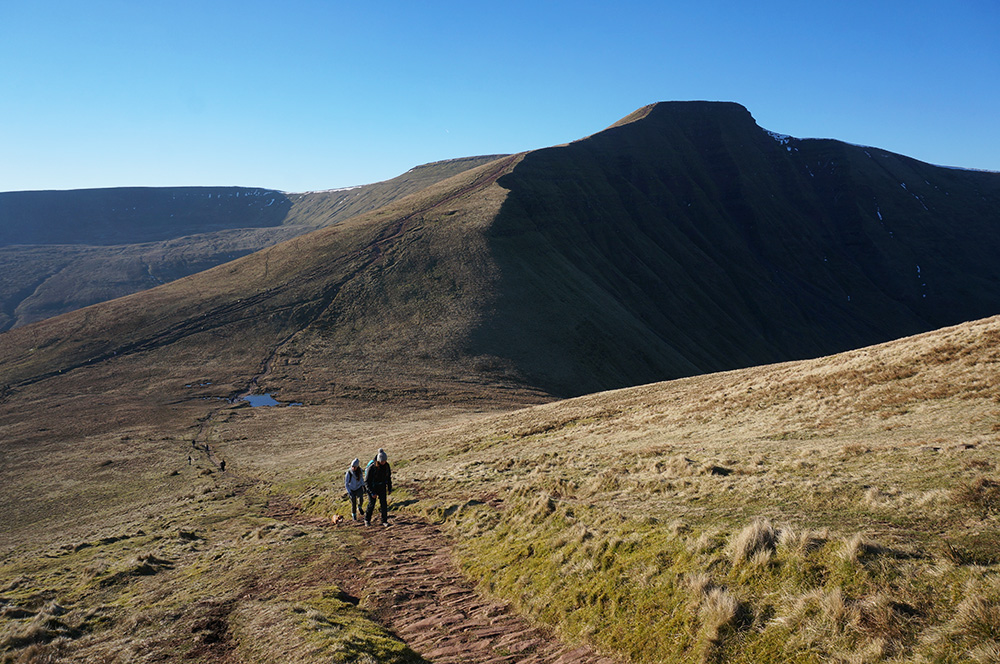 Looking back to Pen y Fan from the climb to Cribyn.

In the depression between Pen y Fan and Cribyn, there’s a beautiful pool, frozen over now, as were all the other water bodies I passed. The temperature was still low but the wind had almost completely dropped and in full sun, this was the closest that winter came to feeling like spring.

On the long, steady climb to Cribyn there are great views back to Pen y Fan. In fact, this is the first point on the walk that the full profile of the mountain can be seen, and it is beautiful. 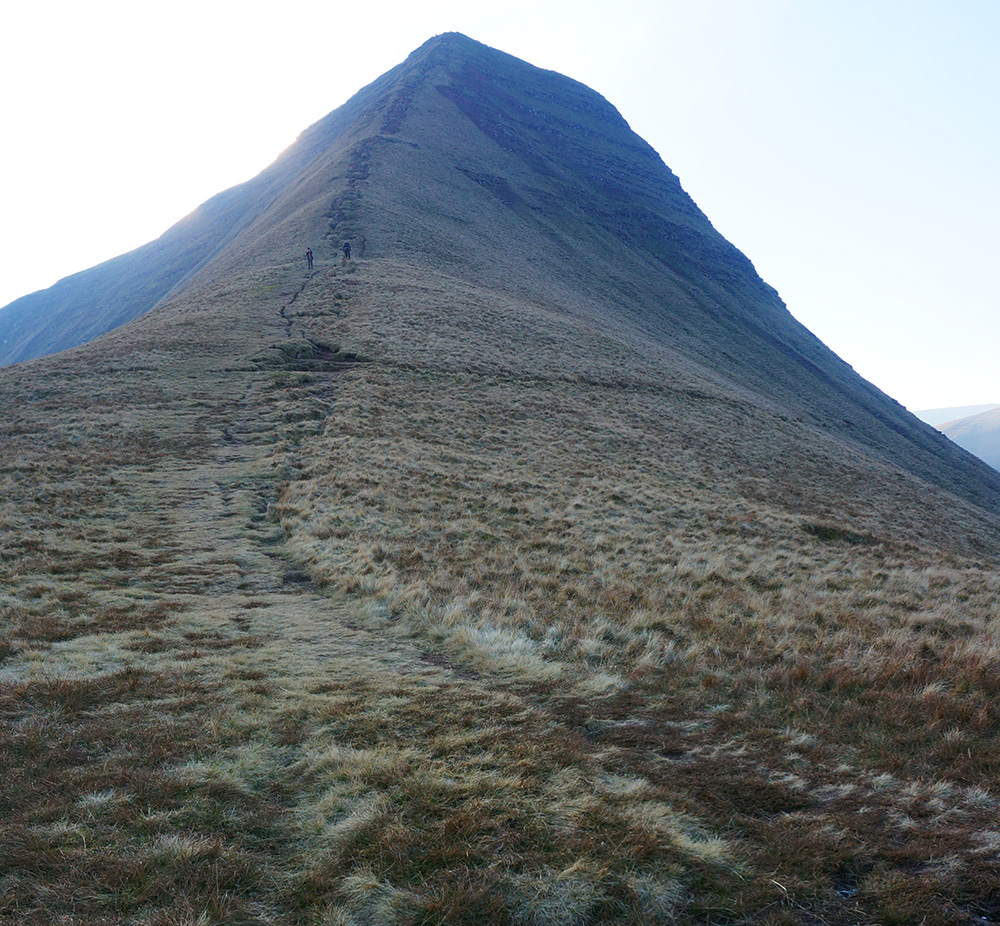 Looking back to Cribyn up the steep descent from the summit

There were just a few hardy souls at the summit when I arrived and most were not headed in the same direction as me. After a short pause, I quit the top and headed down the very steep drop to the Bryn Teg ridge, feeling very glad to be climbing down and not up – definitely a scramble and not a walk. 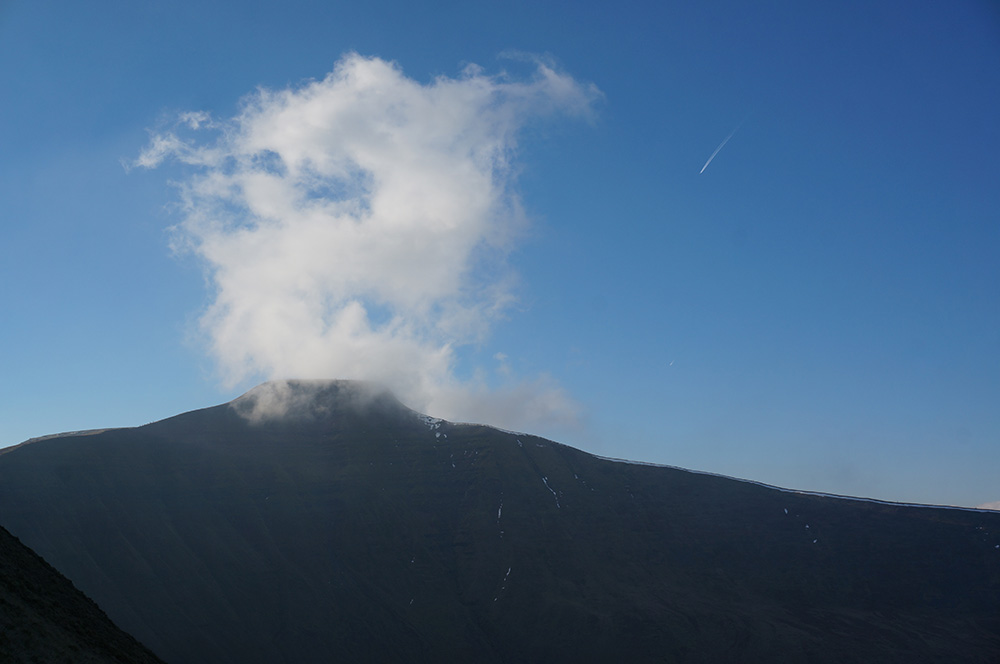 A lonely cloud appears over the summit of Pen y Fan.

At the base of the steep drop, the ridge flattens out to a gentle fall and walking is easy with great views to left and right. At one point, a lonely cloud appeared over Pen y Fan and then quickly dispersed and faded as it moved north.

The ground on this broad ridge would have been wet or marshy in warmer weather, but now it was crisp with the sound of crunching ice crystals at every step. 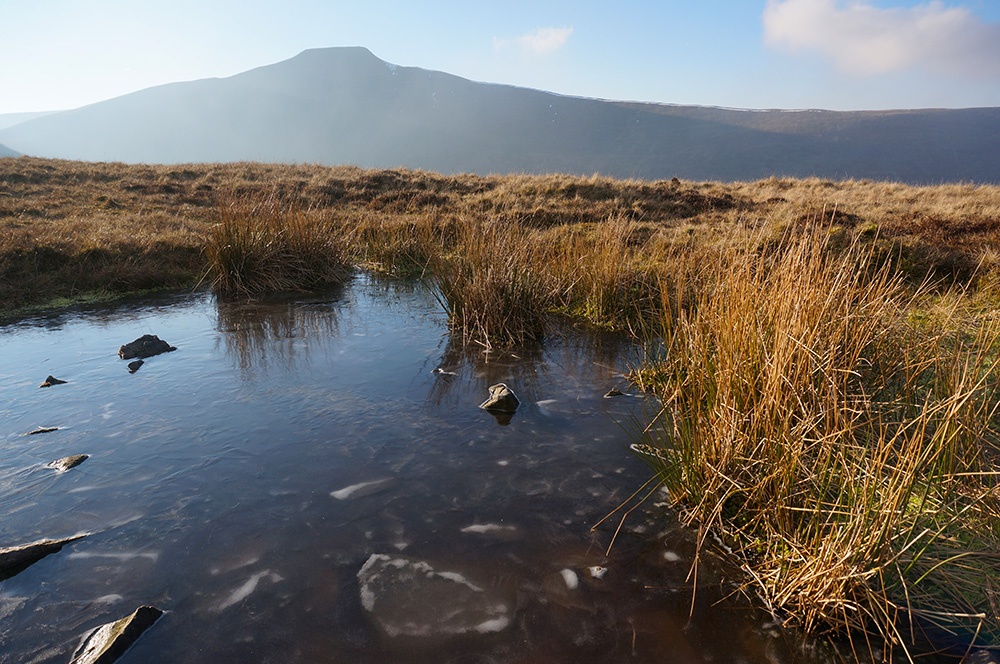 There were many pools along the way that were frozen over, the ice making beautiful patterns as it froze over rocks and around Soft Rush (Juncus effuses).

By three o’clock in the afternoon, the sun was lower in the sky and the colour of light had changed to a golden hue, picking up the straw-coloured stems of grass and rush. There were dramatic views across to Fan y Bîg backed by approaching cloud from the east. 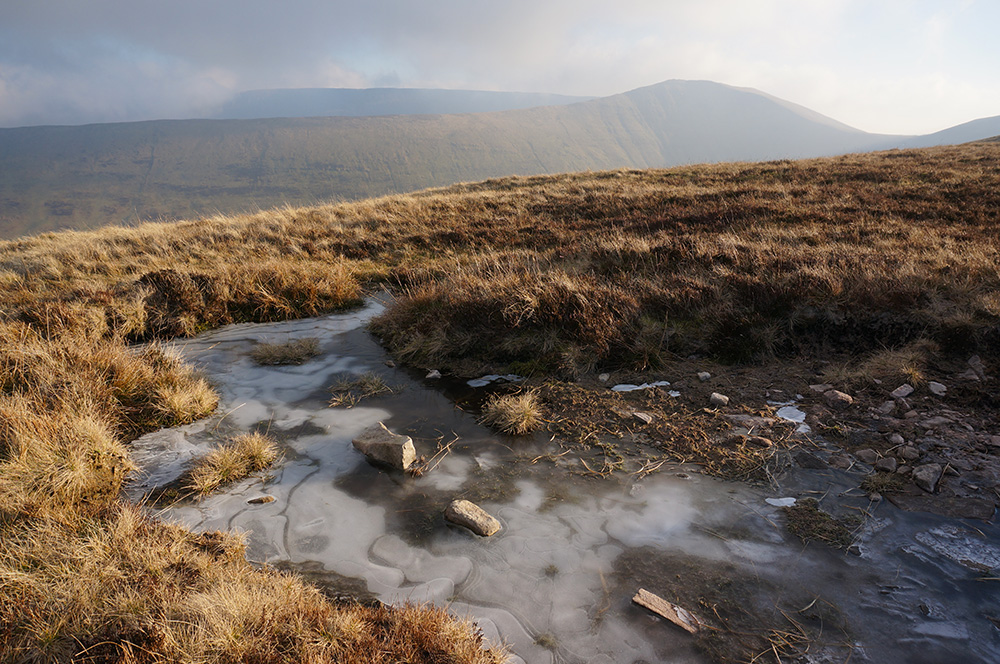 The ridge path eventually runs down to farmland and to a gate onto a track. The transition from open, wild country to managed farmland is often abrupt and it gives the impression of moving from one world into another – a return to reality.

The route back to the start follows a narrow lane to a bridge over the Nant Sere and then a footpath across farmland to the road leading to the car park. I arrived back at the car exactly 4 hours after leaving. A very good walk and well worth the drive.∗