My third trip to the Lakes in 2018 also marks the third anniversary of my Wainwright odyssey. It’s exactly three years since I made my first tentative steps towards the summit of Low Pike in the Eastern Fells. At that time, I wasn’t even sure if I was up to walking the fells and the idea of walking all 214 of them seemed like an enormous challenge, which is why my original objective was to complete the Wainwrights before my sixtieth birthday. At the current rate, I should complete the round sometime early next year, by the age of 57. Over the last three years, my fitness has improved considerably and although I’m not running up the hills, I’m pretty confident that the remaining tops will not present a great physical challenge. In fact, the most challenging aspect of the whole adventure is the logistics of getting to the Lakes from my base in Hampshire. Which is why this has become more of an odyssey than a challenge.

Ostensibly, I was travelling to the Northwest to complete my external examining duties at MMU. This would be my fifth and final year as external and on each of the previous three trips, I’d managed a sneaky visit to the Lakes to fill in some gaps. This time, I wanted to complete the walk I’d planned at the end of my May visit but which had to be aborted because of car trouble.

I particularly wanted to bag these tops because of the geographical neatness it would give to the remaining tops, all of which fall in the southwest of Lakeland. 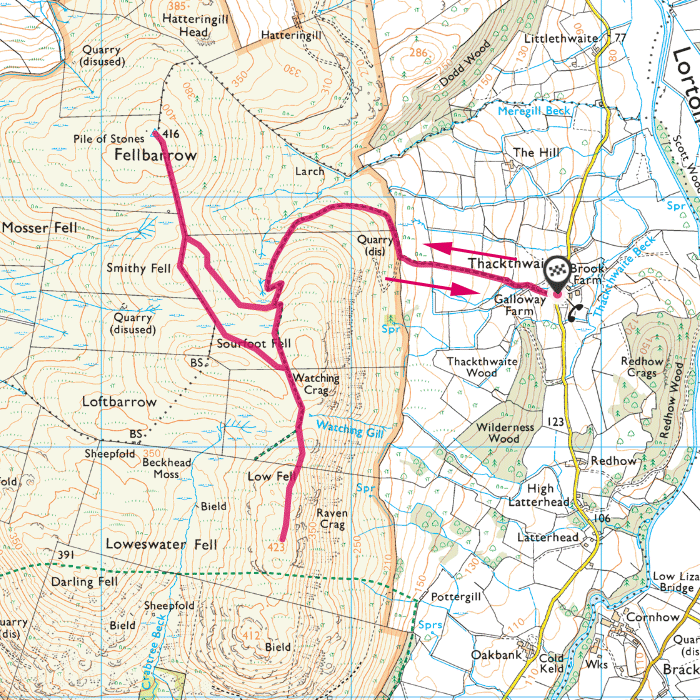 I set off from Southport late, after moving some of mum’s furniture with my brother. We’d had a spare bed on the ground floor while she was recovering from her knee operation and now she wanted it moving back upstairs. I had hoped to get away earlier but the light evenings meant I still had plenty of time to complete the planned walks.

I arrived at Thackthwaite at 3pm, laced up my boots and set off to find the footpath out of the hamlet and across the fields to the intake wall. A finger post points the way across a private yard and into a damp and slippery pitched lane. Soon enough, the lane opens out onto fields and the footpath follows a row of oak trees to a gate in the intake wall. 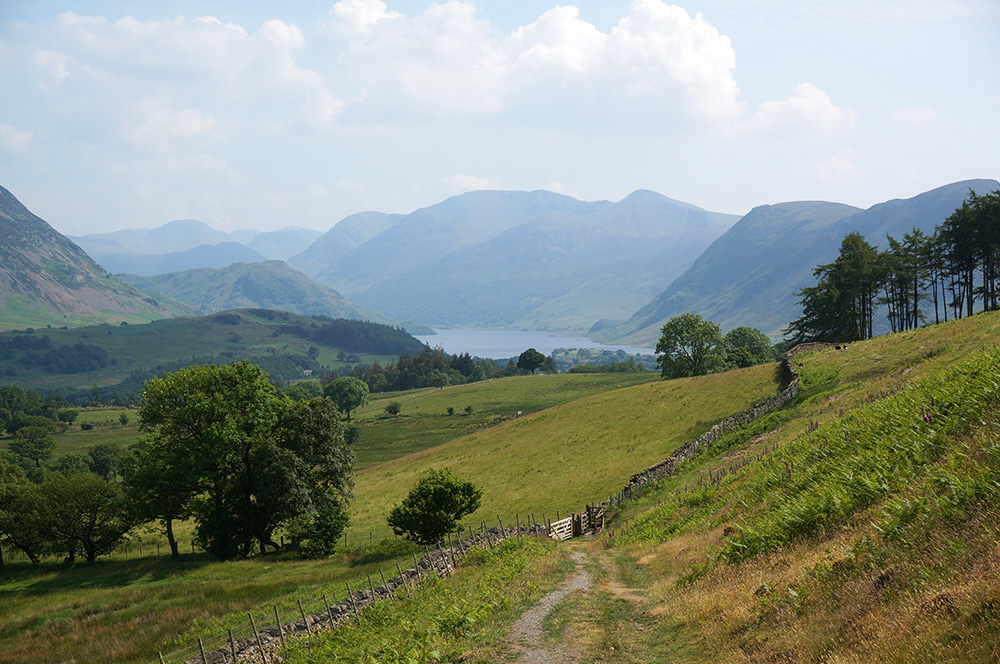 View back along the rising drove road above the intake wall at Thacktwaite.

From the gate, a drove road rises right and around the shoulder of the fell. As the track rises, lovely views open up to the south over Crummock Water, past Mellbreak and to the higher Western Fells.

As the track climbs and steepens, Fellbarrow comes into view and the line of ascent, below Smithy Fell becomes clear.

The day was hot and I stopped at a large boulder to apply some sun screen and take a drink of water. I had wondered whether it was sensible to make this trip, given the time of day but I was now in no doubt. It was a beautiful day and the views were lovely. 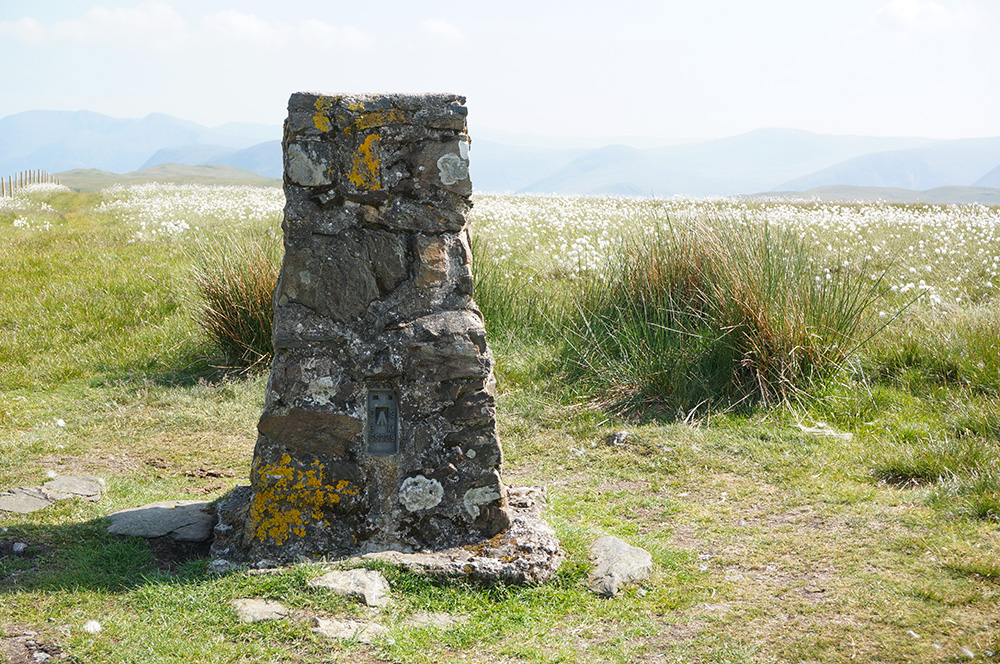 As the path gets steeper, there is a section of zig-zags, at the mid-point of which, a faint path leads off right and follows the contour below Smithy Fell. I then followed the path on the left-hand side of the fence up to Fellbarrow summit. 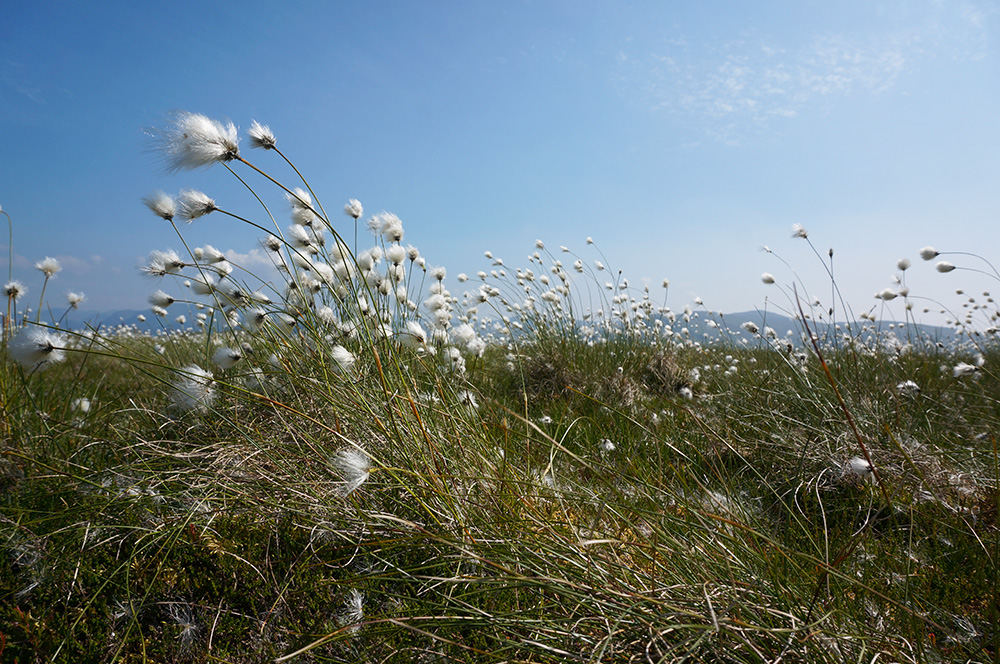 Cotton-grass (Eriophorum angustifolium) at the summit of Fellbarrow, dancing in the light breeze.

At certain times of year, Fellbarrow summit would be nothing special, no more than a grassy dome but today it was a place of beauty. The Cotton-grass seed heads were at their very best, the sun shone down and a light breeze gave just enough cooling and animated the fluffy, white “cotton”.

This was one of those moments on a walk when I wished I could stay for a long time and just enjoy “being”. I did stay longer than planned but I had two more tops to fit in and a long drive back to Southport. 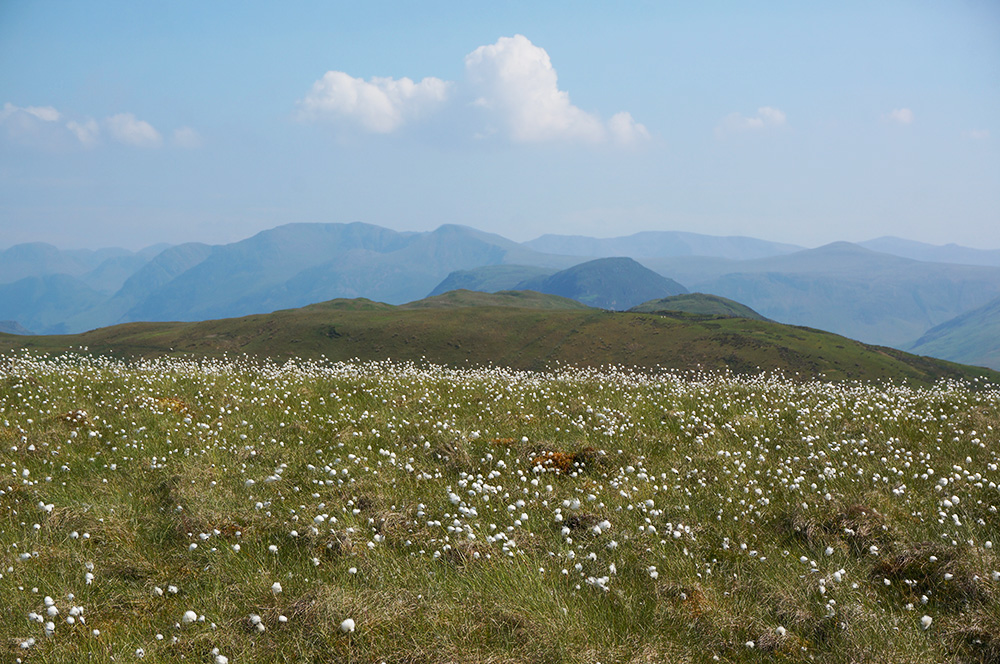 The view due south from Fellbarrow towards Mellbreak and the Western Fells beyond.

Reluctantly, I retraced my steps down from Fellbarrow and followed the ridge line towards Low Fell.

Walking in fine weather is a joy but I guess you have to experience walking in poor weather to fully appreciate it. Well, I was really enjoying this walk and I soon arrived at Low Fell north top (the actual summit). The view southwest, along Crummock Water with Grasmoor to the left and Mellbreak to the right is stunning. 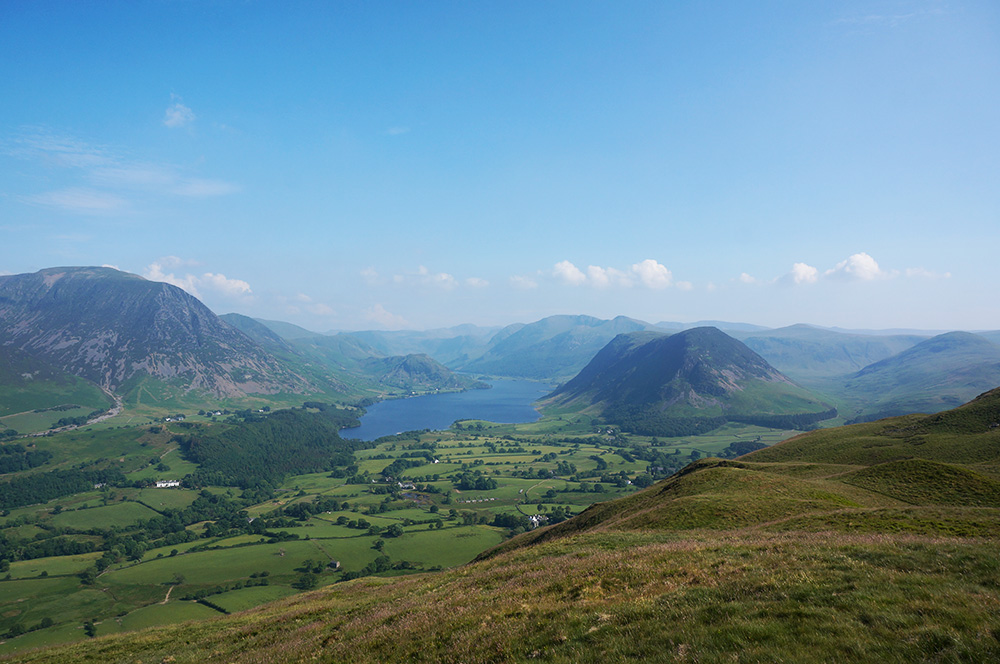 The view southwest along Crummock Water from Low Fell with Grasmoor on the left and Mellbreak on the right.

I walked a little further south to get an even better view but because of the time, I didn’t visit the south top. After a few minutes contemplating the scene before me, I returned along the ridge and then rejoined the drove road.

I arrived back at the car a little later than planned but I didn’t mind, that had been a lovely walk.

So I’d bagged the two Wainwrights on today’s list but I still needed to add Knock Murton. This is not a Wainwright but it’s on the list of Fellranger fells and it stands on the westernmost edge of the Loweswater Fells group.

I drove to the Felldyke car park, arriving shortly after 6pm. The footpath from the car park runs along the shore of Congra Moss, a small reservoir. Views across the water are backed by Blake Fell, where I’d been just a few weeks before. 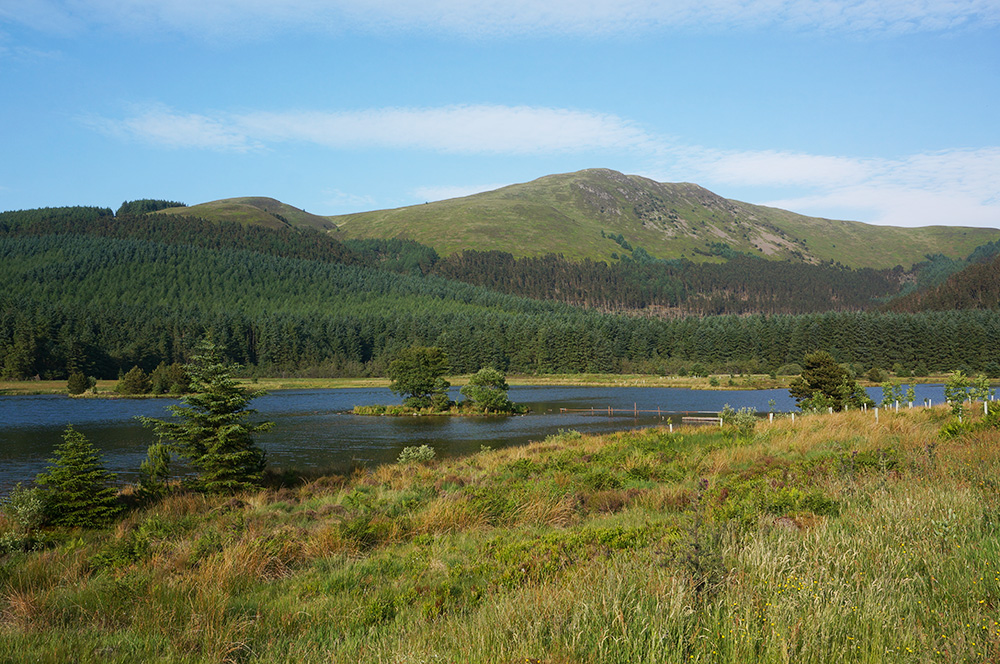 Looking across Congra Moss to Blake Fell from the lakeside footpath.

I took the Donkey Track up to the forestry road and followed that to the plantation entrance. At that point, I turned right and tramped up the steep grass slope, following the fence past old spoil heaps. This was a pretty unpleasant climb over rough grass and with biting Horse Flies seemingly everywhere.

At the highest point on the fenceline, a faint path leads off left and directly up the steep fellside to the summit. 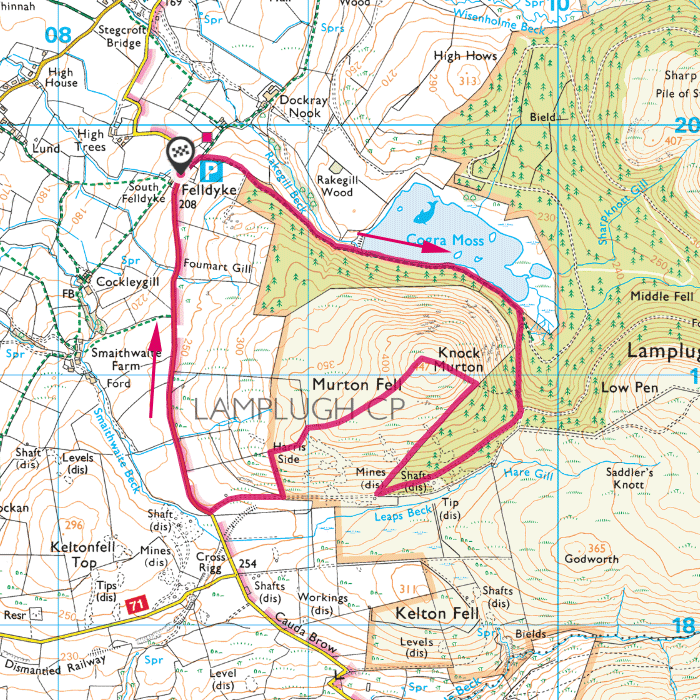 Towards the summit, the flies disappeared and I emerged from the shade of the hill into golden, early evening sunlight.

I sat down on the grass and for the second time that day, decided that I’d rather not leave. It was a beautiful evening with not another soul to be seen but I had to be in Manchester early the following morning, so I reluctantly left the summit just after 7.30pm.

I arrived back in Southport at 10.30pm after a thoroughly enjoyable day out.∗

So that takes the Wainwright total to 170 with just 44 remaining.