Almost exactly 20 years ago, Simon Schama’s book Landscape & Memory was published. It’s not an easy read but it became a significant influence on the way I taught Landscape Architecture. Essentially, the book describes “landscape” as being a construct within the mind of the individual rather than an objective entity whose constituent parts are rock, water and vegetation. Schama believes that nature and human perception are indivisible and that “Before it can ever be a repose for the senses, landscape is the work of the mind. Its scenery is built up as much from strata of memory as from layers of rock”.

At the time, such an approach to the appreciation of landscape was entirely alien to me. Having studied physical geography and geology as an undergraduate, I had developed a very pragmatic and scientific appreciation of landscape. I could tell you how a landscape had been formed and what processes were involved over given spans of time. I enjoyed being able to deconstruct landscapes in this way and my appreciation of them derived from this deep understanding. I didn’t consider psychology to be an important component of landscape.

Schama’s book helped me understand how the personal perception of a landscape was as important to the observer as its physical properties. This in turn helped me in developing my approach to the design of landscapes and how landscape design should be taught.

I was reminded of this part of my developmental history by a recent trip to the Lake District where I experienced a strong sense of what can only be described as “landscape nostalgia”.

I have lived almost all of my adult life in London and in Hampshire. The south-east of England has a somewhat varied but very particular landscape, from the flat urban sprawl of the London basin to the downland of the north and south downs. Those parts that are not urban or suburban or semi-natural are intensively farmed. There are few “natural” landscapes and there is certainly no “wilderness”.

My childhood landscapes were different. I grew up in the north-west of England and although I lived in urban and suburban settings, family holidays were always taken in landscapes that (in a British context) could be described as “wilderness”. North Wales, the North Yorkshire Moors and the Lake District are the landscapes I remember most clearly. My memories of those regions are not all rose-tinted. I also remember the cramped caravans and the rain, but in the main, they are happy memories.

A few weeks ago I had to be in Manchester for work and so I took the opportunity to plan for a couple of extra days to allow for a visit to the Lake District and to do a little fell walking. In truth, I’d been planning to get up to the Lakes again since I visited with the family at the end of last summer. I found that visit a little frustrating – there are always compromises to be struck when travelling with family – and this time I (rather selfishly?) decided I wanted the place to myself.

I had done my research and using Mark Richards’ excellent Fellranger books, I planned to visit 7 peaks in 2 days. Time was tight and the weather was dodgy, so I decided to walk the two legs of the Fairfield Horseshoe – the eastern leg on day 1 and the western leg on day 2 – and that turned out to be a good choice.

I arrived at Ambleside on a rainy Wednesday morning but the forecast was for a dry afternoon. By 2pm, the rain had stopped and I set off for Low Pike, leaving behind the tourists and outdoor gear shops of a busy Ambleside. As soon as I left the town, I was on my own and for the next 6 hours, until my return to Ambleside, I saw just 6 people. 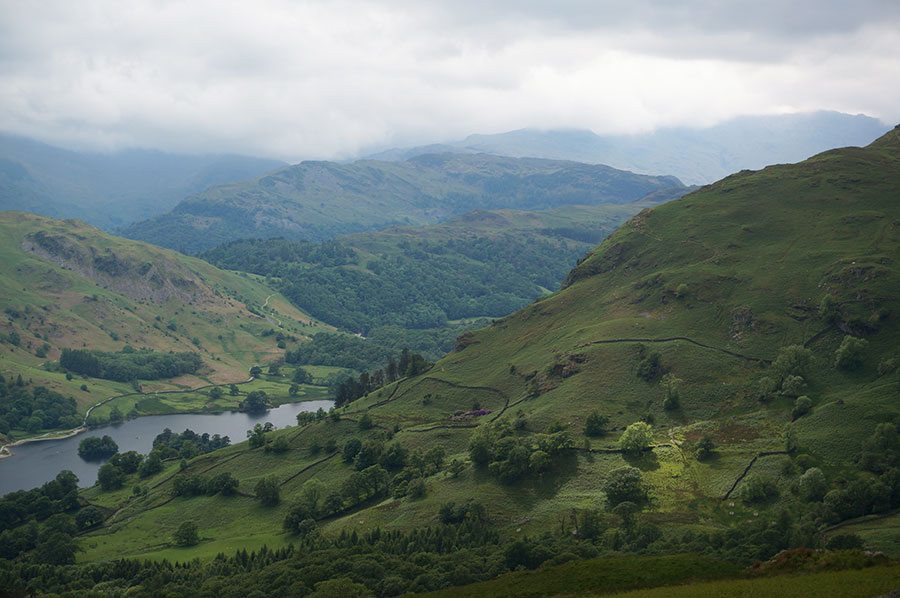 View to the west from the ridge path below Low Pike

Long before I reached the first peak, I knew I was in the right place. As I reached the ridge path after climbing up from the Scandale Beck valley from High Sweden Bridge, the landscape opened up and I saw the view past Nab Scar, across Grassmere and beyond, towards the central fells. It was at this point that I experienced a strong sense of nostalgia. But the feeling was not a lament for times past, it was an almost euphoric realisation that I have a much greater affinity with this landscape than I do with any other – it was like meeting a long-lost friend.

The higher I climbed, the more dramatic the views became and the fact that I was totally alone only enhanced the beauty of the place and the experience. I’m not as fit as I used to be but the toil was more than made up for by the reward of that landscape. 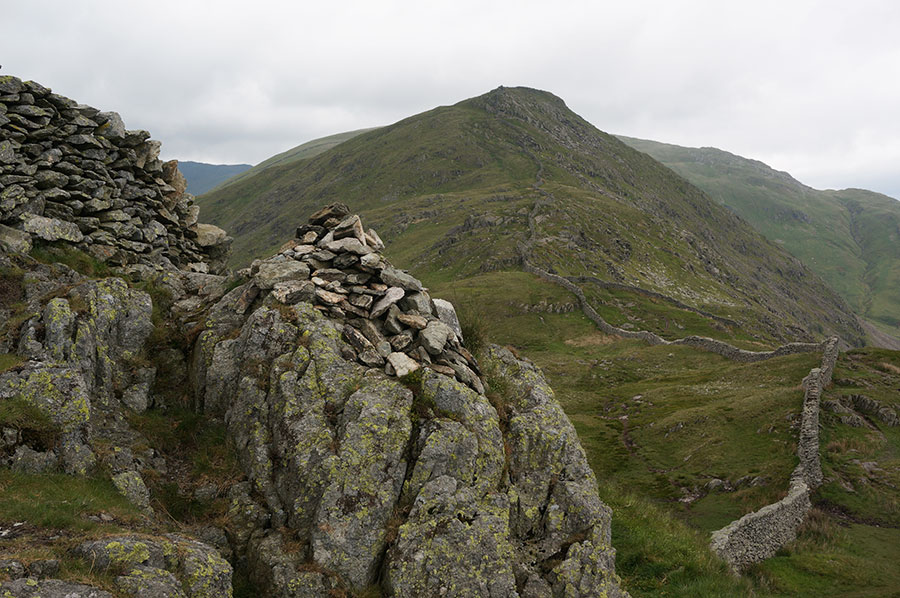 The cairn at Low Pike, looking north to High Pike along the ridge path

From the top of Low Pike, the ridge path leads on to High Pike where the path runs either side of an amazing dry stone wall, and then to Dove Crag at 792m, the farthest point on my first days walk.

When I got to Dove Crag, I really didn’t want to turn around and was sorely tempted to continue on to Hart Crag but I knew I didn’t really have the time, it was already early evening. So I hung around for a while, taking in the panorama and photographing a second cairn, about 100m further on from the summit, on top of which someone had placed a stone vertically, bringing the cairn to a sharp point, which looked fantastic against the panoramic backdrop.

From Dove Crag, I retraced my steps and returned to Ambleside feeling totally satisfied and only a little tired. On the way back, the dynamic combination of cloud and light that had made the walk so dramatic, continued to play. 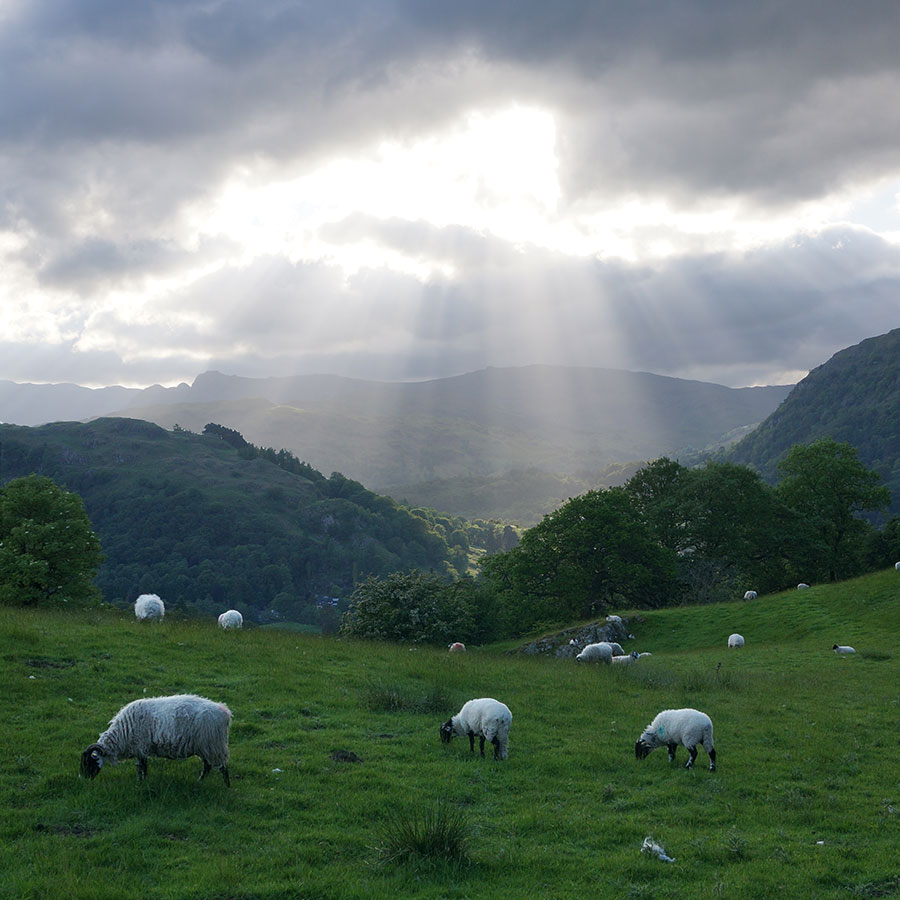 Sunlight breaking through cloud on the return to Ambleside

I arrived back in town at 8pm and made my way to Hawkshead YHA, looking forward to day 2 of my trip.

Thursday was a day of low cloud and hazy views. The walk, taking in 4 peaks, was demanding (for me) and the temperature drop from a hot, sweaty uphill slog approaching Stone Arthur to wishing I’d brought my gloves nearing the summit plateau of Fairfield was the biggest surprise of the day (gloves in June!).

It became clear that I hadn’t planned the most efficient route and the views were not as clear as the previous day but I didn’t mind, just happy to be up there. 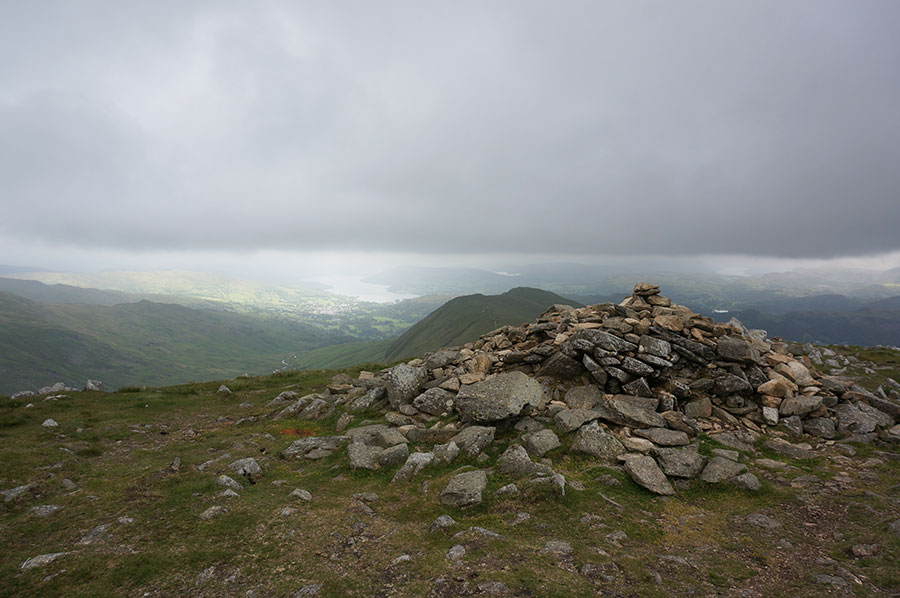 The most dramatic section was the ridge walk from Great Rigg, just below the cloud, up to Fairfield above the cloud base. On the approach, cloud was moving in from the west and cascading over the ridge down into Rydal Head. Once above the cloud, visibility dropped to less than 50m and there were no views from Fairfield summit, just a bunch of souls, trying to eat their packed lunches, huddled inside the shelter cairns in an attempt to get out of the wind.

After lunch at Fairfield, I retraced my steps and then continued along the ridge path to Heron Pike, after which it was time to return to Grassmere Village where my walk had begun.

I’m already planning my next trip to the Lakes when I hope to complete the Deepdale Round. I’ll be returning because I want to get to know my long-lost friend better. I like developing an understanding of the physical place but I also want more of the genius loci. Simon Schama is right; it’s not the fact that I can identify a lateral moraine on a valley side that makes this landscape real, it’s the memories I have of it and the sense of feeling completely at home when I’m in it.∗

I’m not admitting it to myself just yet, but I would like to “bag” as many Lake District peaks as I can before my 60th birthday. After all, there are only 214 Wainrights and I’ve already done 7 of them – how hard can it be?