During this summer (2015), I traveled to 2 similar but very different landscapes. At the end of July and into early August, my wife, Hannah and I spent 2 weeks exploring the French and Spanish Pyrenees on a broadly circular road trip of 1100km. This was the first proper holiday Hannah and I had had on our own for 18 years, our two teenagers being otherwise occupied (hurrah!). Then, at the end of August, I spent 4 days with my daughter, Tilly in the Lake District, aiming to bag a few more Wainrights.

I really enjoyed both trips, particularly the landscapes (and the company, of course). The similarities and contrasts between the two landscapes made me think about the particular characteristics that make them appealing.

Both landscapes are similar in that they are mountainous with peaks, valleys and passes but the scale of the two is quite different, with the Pyrenees being around 3 times as high as the Lakes.

Prior to these visits, I would have said that the larger landscape must be the more spectacular and there’s no doubt that the Pyrenees were very beautiful in a big, Alpine sort of way but although the views were fantastic, it was difficult to feel intimate with this landscape, it was just too damned big. Yes, there were plenty of walks but it wasn’t easy to find a satisfying circuit that could easily be completed in a day and provided a sense of achievement. As a consequence, we spent much of the time on driving tours in order to see as much of the country as possible and to visit the many small towns on our route. In a sense, this was an exploration of places within a landscape rather than of the landscape itself. 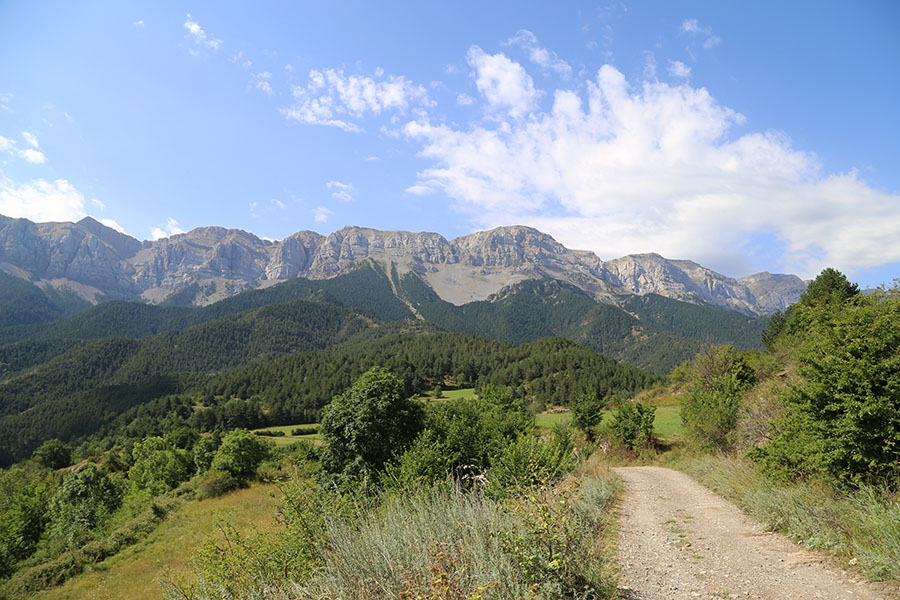 The spectacular Serra del Cadí in the north of Catalonia, Spain.

It became clear that scale is an important factor in the experience of any landscape and that although large landscapes can be awe-inspiring, they can lack intimacy.

In the Lake District, Tilly and I completed two classic day walks, Helvelyn via the Edges on 25th August and the Deepdale Round on 26th August using Vivienne Crow’s excellent guidebook, High Level and Fell Walks. Both walks started and ended at the southern end of Ullswater, at Glenridding and Patterdale, respectively. It seems to me now that the perfect day walk involves a steep climb from a valley bottom, up to a ridge line, around the valley head, taking in peaks along the way and then a return along the opposite ridge and a descent back to the staring point. In a Lake District context, that makes for a good day walk of somewhere between 7 and 9 hours. In larger landscapes, that sort of satisfying circuit is just not possible in a day.

The two walks were excellent, with the Helvelyn walk being the most technically difficult and the Deepdale walk being the most energy-sapping. There were lots of highlights during the walks but the scramble across Striding Edge was probably the most exciting. We took Vivienne’s advice not to use the lower “easy” path and traversed the rock arette. This is absolutely fine as long as you don’t think about what you’re doing and don’t worry too much about the precipitous drop on either side! 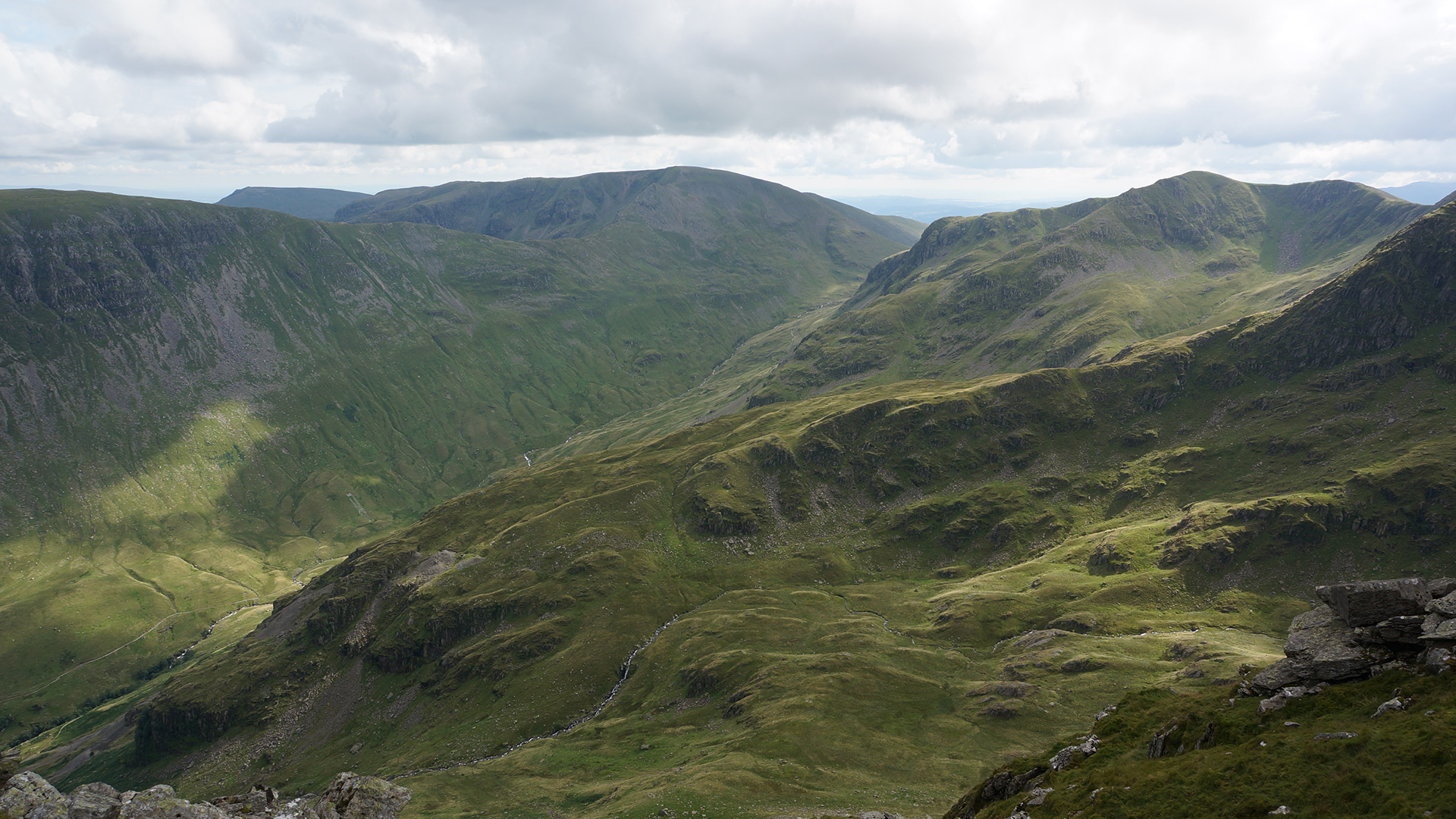 The reward for this bravery is a fantastic panorama to the west, taking in St. Sunday Crag, Fairfield and Dollywagon Pike. Inevitably, the route to the summit is not so easy after completing the edge, requiring a drop down a rock chimney and then a climb up a steep, rocky slope. Having gained the summit plateau, there is definitely a tendency to want to spend some time there. It’s a time for reflection and refuel.

By contrast, the return along Swirral Edge seems easy but don’t miss the short-ish trek up to the summit of Catstycam, possibly one of the most perfect summit-like summits in the Lakes.

The Deepdale Round is a different sort of walk, beginning with a long, hard slog and then a level-ish walk over boggy moor, towards another climb to the summit of St. Sunday Crag, a real monster of a fell. It’s imposing and has the feeling of some massive animal, a humped-back whale maybe. It’s a shame that the summit is ill-defined and, like Fairfield, forms a broad plateau.

The walk around Deepdale head takes in Fairfield and Hart Crag with the only difficulty being a steep scramble down from Hart Crag to the ridge line below. Once down, it’s a long and lonely (after the relative hubub of Fairfield) walk back to Patterdale taking in the ill-defined Hartsop Above Howe (is this it?).

All-in-all an excellent two days of walking. We had planned a third day on the fells but, to be honest, I was knackered after those two day walks and I think Tilly was too, so we reserved day three for R’n’R and a visit to Aira Force waterfall.

The scale of the Lake District suits me just fine. Of course, I loved the big, dramatic and beautiful landscape of the Pyrenees and would thoroughly recommend a visit but it’s difficult to get intimate with a landscape of that scale and I felt more of an observer than a participant.∗

So that makes for 14 Wainrights in total – only 200 more to go and six and a half years in which to do it.