The Unique Colour of March

When does an interest become an obsession? Are all obsessions necessarily bad? I guess these are questions that most people have to answer for themselves. Most aspects of life are relative; one person’s obsession may just be another person’s passing interest. My own personal obsessions mainly serve the purpose of temporary distractions from work and family life.

So nothing unusual here, I’m not breaking any moulds. It’s just that I often feel that I’m not the same as every other bloke of my type, and then it turns out that I am very much the same. This painful discovery happened again this week.

Easter was very early this year and the university calendar didn’t completely overlap with the school calendar, meaning that there was an opportunity for a week in the Lakes before the schools broke up. I spotted this window at Christmas and booked 5 nights (on my own) at YHA Ambleside, the third Lake District hostel I’ve stayed at since this challenge started. 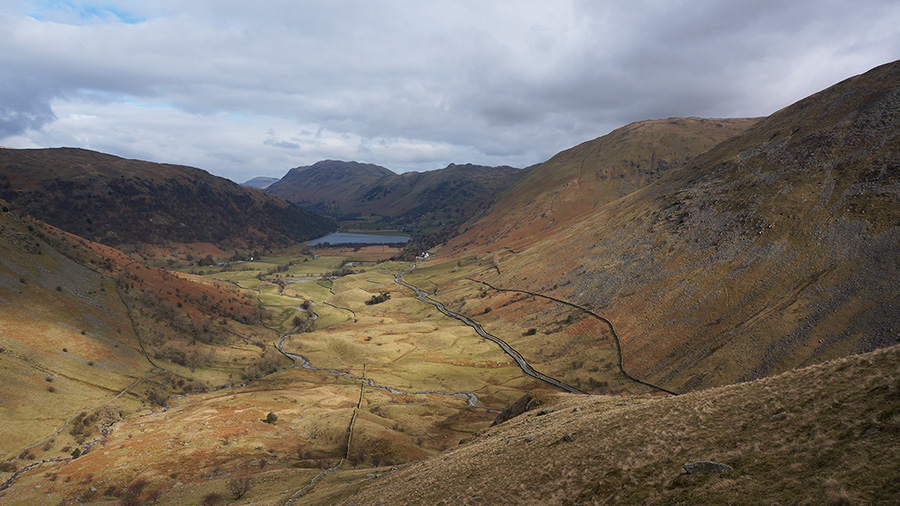 The view from Middle Dodd, looking back towards Brothers Water.

I spent the months between Christmas and Easter planning the routes I would walk and the Wainwrights I could bag along the way. Wainwright bagging, that’s my latest obsession/passing interest. And naturally, I feel this should be something unique to me (or at the very least, unique within the sub-group of “blokes like me”).

I drove up to the Lakes last Sunday and checked into YHA Ambleside, a fantastic location, right on the Windermere lakeside at Waterhead.

The following morning I was up early and ready for breakfast when the refectory opened at 7.30. I was keen to make a prompt start on my first day-walk of 2016.

I tucked into my breakfast and began to survey the room. There were the usual groups of students and retired couples, all chatting away, excited about the day ahead. Then, to my horror/amusement, I noticed a third demographic. There were around half a dozen white, middle-aged blokes eating breakfast on their own while studying maps and guide books (a classic technique for avoiding unwanted conversations). Obviously, I couldn’t say what income group, political leaning, sport or alcohol preference these blokes had but I could have had a pretty good guess. I am not unique, I’m one of many. It’s a bit like that feeling you get when going to see a band that only you have ever heard about and discovering that everyone else at the gig also knows all the words to the songs, even the ones on that limited edition 7″ single with the hand-printed label. It’s a disappointing realisation but I’ll get over it. 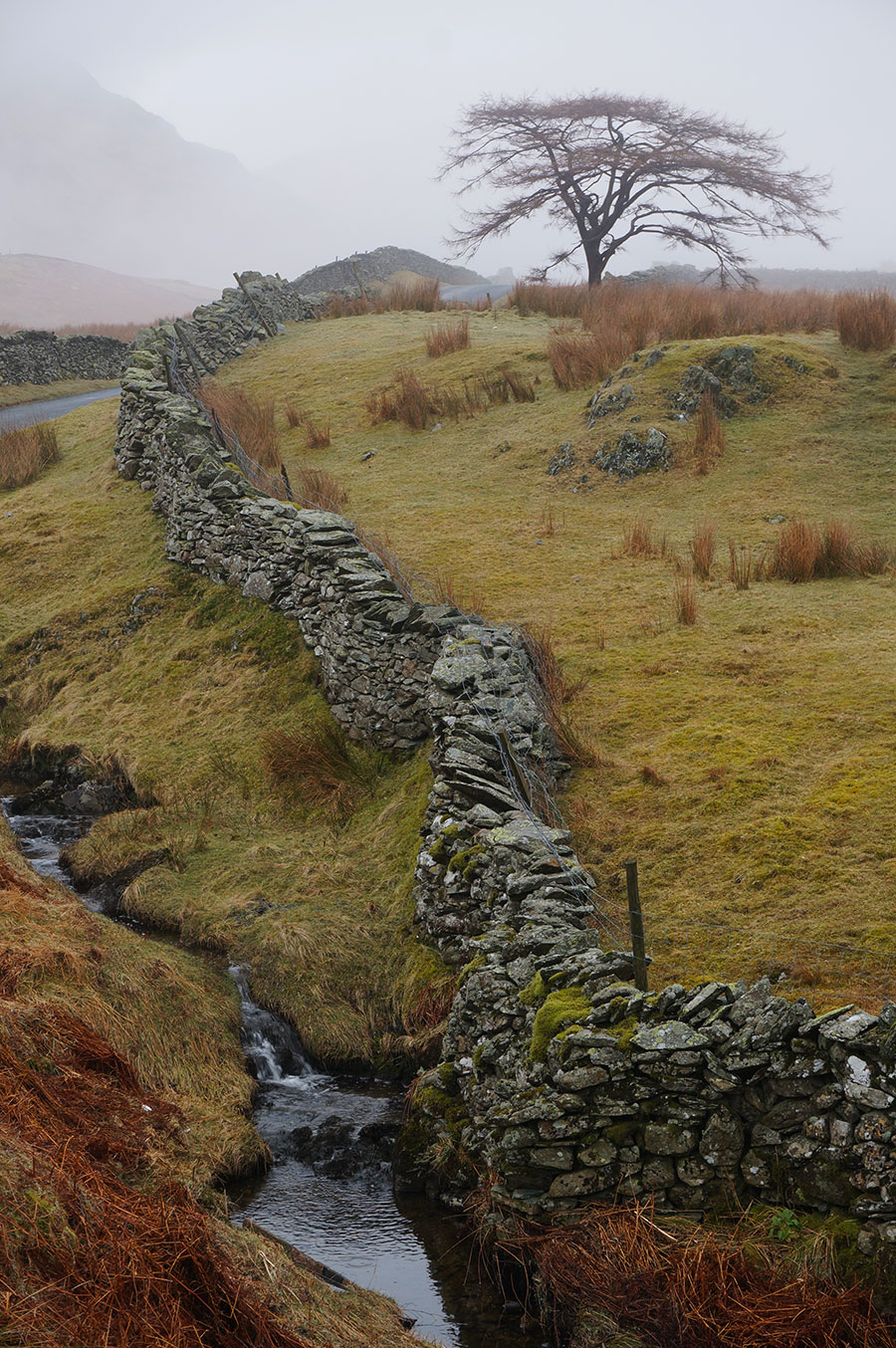 A tree on “The Struggle” between Ambleside and Kirkstone.

The weather on this outing was mixed and on one day I was feeling pretty ill and settled for some downtime but I managed to get three day-walks and a short outing to Nab Scar from a five day visit while remaining mostly dry. In Lake District terms, that’s a success.

One of the things I noticed while there, and particularly when comparing photos from my previous visit in August was the significant difference in the colours of the landscape. Whereas the previous trip was characterised by greens and blues, this one was saturated with the burnt reds and straw of winter bracken and grass. 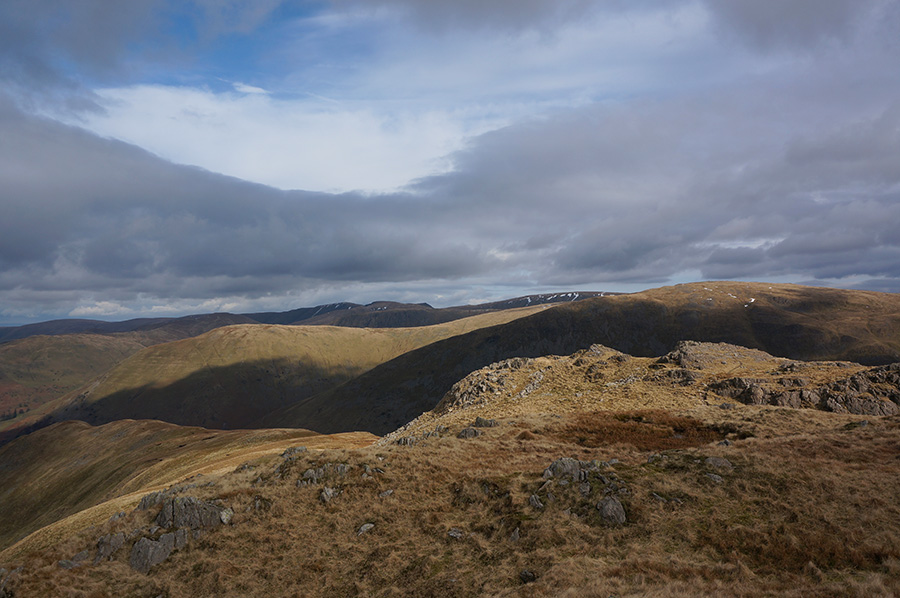 The colour of March: looking east from Little Hart Crag

Colours weren’t the only difference at this early stage of the season, the fells were also much quieter. I barely saw another soul on the first two day walks and it was only on the Friday (Good Friday) that people appeared in any number. Of course, towns like Ambleside were busy all week but most people don’t venture out onto the high fells.

There is something joyous about being alone in a landscape with no sight or sound of any other human being for as far as the eye can see and the ear can hear. It’s something about being at one with the place. One of the best moments of the week was seeing and hearing the Skylarks; such a beautiful and unexpected sound and me the only person there to hear it. 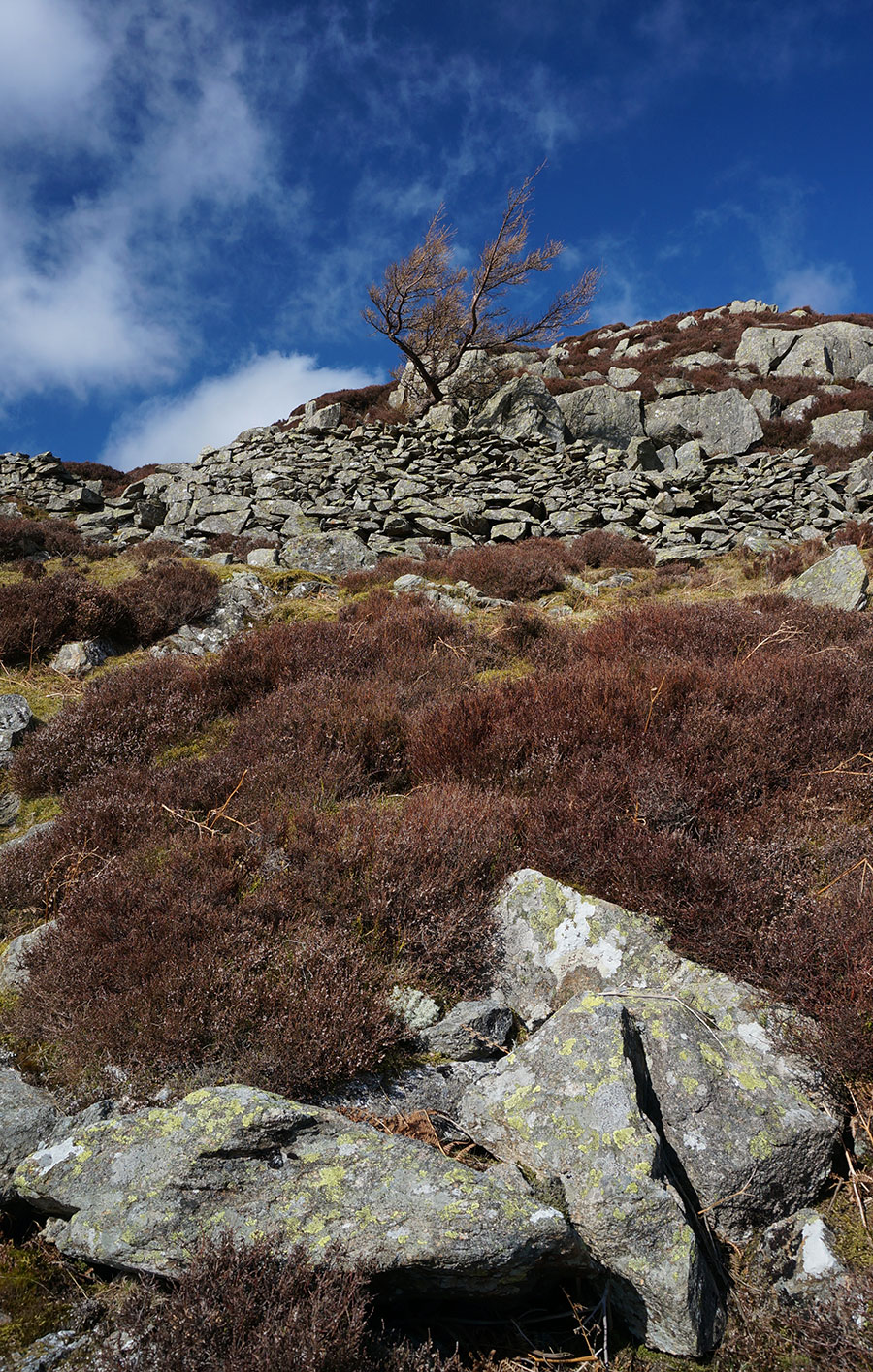 A tree en route between Glenridding Dodd and Sheffield Pike

Naturally I’ll be returning to the Lakes later in the year (it wouldn’t really be an obsession otherwise, would it?) and my aim will be to complete the Near Eastern Fells and maybe make a start on the Central Fells.

I’m not at all put off by the fact that there are lots of other blokes just like me, doing the same thing. And I’m quite sure they must also be blogging about it too. Maybe I’ll search and see what they wrote about this week. Of course, I don’t want to meet these other blokes, that would defeat the object of the exercise, but I may be able to work out how different (if not unique) I am from those other white, middle-aged, middle-class blokes.∗

That completes 28 of the 35 Wainrights in the Near Eastern Fells, leaving just 186 overall.
* Not a Wainwright but classified as a Hewitt.

Thanks to authors Vivienne Crow, Mark Richards and Alfred Wainwright, whose books have been excellent guides.