Wainwright’s aren’t the only guidebooks to the Lake District fells, other authors have followed in his footsteps. Notable among his followers are Bill Birkett, whose Complete Lakeland Fells was published in 1994 and Mark Richards’ Fellranger Guides, published between 2008 and 2013.

Birkett’s guide identifies 541 “tops” equal to or over 1,000ft in altitude. It’s a more scientific or completist approach than any other guide and completing the Birketts has become an objective for some. Presumably, those who have completed the relatively modest 214 Wainwrights and are looking for something else to do! 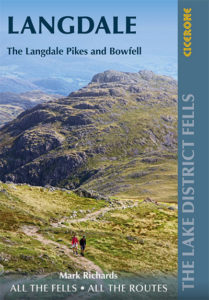 Richards’ guides are more similar in content to the Wainwright guides; they are a curated collection of the fells that the author feels should be visited by any moderately adventurous walker. Originally, there were 227 Fellranger fells, most of which were also Wainwright fells. However, in 2016, the boundary of the Lake District National Park was extended to include areas of natural beauty to the south-east between the A6 and M6. This included areas of fell, and in his second edition of the Fellranger guides, Mark Richards has included three additional fells in that area, taking the new Fellranger total to 230.

The first edition Fellranger guides largely followed the same geographic areas as the Wainwright guides with the exception of the Southern and Mid-Western volumes, where Richards made good some obvious omissions from the Wainwright guides. The second edition takes a different approach. The principle here is that most visitors will have a valley base and these guides are organised around the fells and walks accessible from eight, key valley bases. For that reason, the volumes take the names of the valleys rather than geographical areas.

The main image (above) shows the view east from the summit cairn at Iron Crag, a Fellranger but not a Wainwright. In the view are Pillar, Steeple, Scoat Fell and Haycock; all are both Fellrangers and Wainwrights.

As a fan of both the Wainwright and Fellranger guides, I aim to complete both, a total of 235 fells. The map and table below show the 21 additional Fellranger fells.

Map of the additional Fellranger Fells

The map above shows the distribution of the additional Fellranger fells. Broadly, they tend to fall in the south-west of the national park. The group of three in the east are those that lie within the 2016 extension to the national park boundary.

* Appears in Wainwright’s The Outlying Fells of Lakeland.

The details in the table above are taken from various sources but most notably:
The Lakeland Fellranger guides (1st edition) by Mark Richards
Lake District (Superwalker XT25) maps by Harvey Maps
Ordnance Survey 1:25,000 maps, OL4, OL5, OL6 and OL7